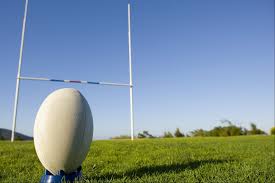 A rugby ball and some goalposts, yesterday afternoon, although it was almost evening.

A study has determined that an overwhelming majority of American people think that rugby, one of the most popular sports in the world, is not very enjoyable to watch. The investigation, carried out jointly by Notre Dame University and The Official New England Patriots Supporters Club (Blanchardstown branch), asked 11 people in the US for their views on the sport, during the recent Superbowl cup competition, a contest which is held each year to find out who is the winner of the best American Football trophy in the whole entire world.

Patrons at The Apple Tavern, a bar in Aukernon, Mississippi (population 82), feel that rugby is merely a glorified version of cricket, though without the bats, and with wickets a different shaped ball and more players, and therefore about as interesting, as bartender Craw Daniels stated: ‘As watching crickets chew puss off a mule’. With this season’s highly-anticipated Six Nations Championship commencing this weekend, and favorites Ireland facing Italy, a number of individuals in Aukernon, and other cities around the US, will be tuning in to watch their favorites compete. Says Jackson Deerfield, from Oklahoma; ‘I can trace my Welsh heritage all the way back to the late ’80s, when my uncle dated a girl from Swansea. Sadly, she was a slut, so I’ll be supporting Scotland’.

At Manhattan’s Yale Society and Social Club, meanwhile, both patrons spoken to claimed rugby was merely ’tish-tosh’ and ‘poppycock’, before calling the security guard, an elderly Irish-American man, who said that rugby was; ‘A load of oul’ shite’, followed by; ‘Up Mayo’.

The Irish supporters will be out in force in the bars across America over the weekend, though one restaurant manager, David ‘Slinky’ Peters, of The Bronx, has stated his concern with regards to the drinking choices of the game’s fans. ‘I’ve searched high and low among all our distributors and can not find anybody who sells a beer called ‘Heino’, nor, indeed, can we find ‘Pints of Plain’, something rugby fans of a certain geographical persuasion seem to favor’. This year’s Six Nations, kicking off this weekend with three games, will not be televised live anywhere in the US, though viewers in parts of Alabama, who won’t be attending this month’s meet and greet hog-chasing event, may be able to listen to the events on radio at Skeeter’s Electronics, Main Street, Montgomery.