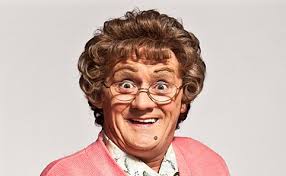 A 47-year-old hedge fund manager faces being deported from Ireland, due, he claims, to the fact that he doesn’t enjoy popular television show, ‘Mrs. Brown’s Boys’. Pablo Dominguez-Burke (he’d an ‘aunt’ from Bolivia) from Finglas, north Dublin, says that it was an off-the-cuff remark in an elevator at work that set off a chain of events, leading to a letter from the immigration services, requesting that he call to their offices for an urgent meeting regarding his Irish citizenship, or as Pablo worded it; ‘About gettin’ arsed out of the bleedin’ country again, to be sure, so I am’.

Speaking with The Heraldy Press, Pablo said; ‘I was in the lift at work, when one of the cleaners said to his colleague, and, I can’t do the accent, but sure, yiz’ll be writin’ this anyway, so you won’t be able to tell the accent so it doesn’t matter, but he said; “Ah Jayziz, did yeh see ‘Mrs. Brown’s Boys’ last night? Wasn’t it brilliant the way she was carryin’ on and doing things that were really funny and all?’ I then merely tutted and rolled my eyes, though that was in relation to the lift’s doors not closing quickly enough, not a reflection on the cleaner’s choice in Irish comedy”.

A reformed cat-burglar with 83 previous convictions, Pablo mended his ways to go on to study chartered accountancy at ‘some college down in the countryside’ (his words), before developing his interest in international banking and the funding of hedges. He has denied not being a lover of the show and not having a sense of humor, claiming that he is a massive comedy fan, enjoying legends of fun like British ’80s stars Little and Large and Cannon and Ball, ‘all the funny ads off the telly’, and especially ‘them redneck lads what do say funny things about lawnmowers and having long hair at the back’.

‘Mrs. Brown’s Boys’, a comedy created during the first Russian Revolution and shown twice on the hour on all 83 Irish channels ever since, was recently reported to have a global audience of 109 billion, and is particularly popular with people who don’t like other stuff, and lads who are in jail for doing mad things.

Sean Driscoll, a representative for the Irish Immigration Services, when asked by The Heraldy Press about the allegations regarding Mr. Dominguez-Burke’s status in the country said; ‘What?’ When we repeated the question, he replied; ‘Ah here, would you stop’.

Incidentally, Pablo’s attempt at taking off the ‘working class’ accent of the lad in the elevator was indeed atrocious.