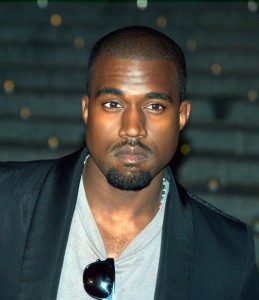 An American rapper has been warned of his behavior and instructed that his recent run of controversial antics must come to an end, should he wish to sit at one of the top tables at this year’s Irish Music Awards. Kanye West, fresh from an incident at last week’s Grammy Awards, where he suggested that ‘Best Album’ winner Beck, should give his award to Beyonce, was criticized by no less a personality than former musician Mr. Dermot McHugh, who is on the organizational committee for this year’s IMAs.

McHugh, an accomplished keyboardist who toured with Johnny Logan (before Logan was the globally-recognized sensation he is today) during the singer’s triumphant travels across Counties Offaly and Leitrim back in 1976, said of Kanye: ‘I seen what he done at the Oscars last week. It’s one thing to be messin’ with the likes of Shania Twain and Def Leppard, but should he keep that up, there’ll be no room at the top table for him at this year’s IMAs. Mr. West and the other rap lads, are welcome to sit with our own stars like Big Tom and Red Hurley but should there be messin’ and carryin’ on, then we’ll have to put him elsewhere. No celebrity is too big. Just ask Philomena Begley, who we moved to the back of the arena a few years back, when she gave Dickie Rock a funny look’.

The Irish Music Awards, sponsored by  Mullingar Creameries, is one of the highlights on Ireland’s entertainments calendar, and is second only to Mayo’s Country, Western and Craic Festival, with regards to radio audiences. ‘This year, we’re hoping that Kilkenny FM as well as some stations in the northeast decide to broadcast us. It’ll be some craic, well I hope so, some years its fairly shite, can I say shite, or would you prefer brutal or desperate?’, said Dermot. Among those scheduled to attend this year’s event, are; Johnny McEvoy, Foster (though not his partner Allen), a lad that used to be on Irish soap opera ‘Fair City’, one of the Cranberries (or the Corrs, we’re not sure which) and a Black Sabbath covers band from Letterkenny. Kanye’s entourage meanwhile, are already rumored to have booked the entire top floor of Bernadette Fitzgibbon’s B&B, which is located just a two-hour drive away from the field where the IMAs will be held in Enniscorthy.

← Study Finds that Most Americans Still Think Rugby is Shite
At The Mike Stand with Brona Crehan.   →