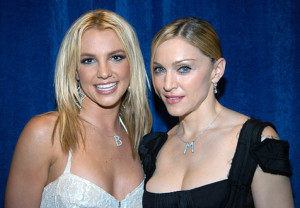 One of these is more than likely Madonna. The other one is the one from The Cranberries, or Philomena Begley probably.

An Irish-born representative for Madonna last night denied that the singer’s well-publicized stumble at music’s Brit Awards in London over the weekend was due to complications from having both of her hips recently replaced, one with a newer aluminium model to assist her with more challenging dance moves, the other with a humpback whale’s vagina, designed for other unspecified reasons.

The spokesperson, Dermot Flavin (59), a dancer who has worked with the star since her ‘True Blue’ period back in the late 1980s, joked that the star’s awkward fall was more to do with one of her accompanying dancers having probably had a few too many mojitos before the show, rather than it being the fault of his perfectionist boss. ‘It was probably due to one of the dancers having one too many, oh, you mentioned that already’, said Flavin.

The fall, which occurred during the opening sequence to her new song, ‘Living For Love’, was at first thought to have been deliberate, coinciding as it did with the lyric; ‘I do sometimes fall down stairs backwards after having had a few oul’ pints’, though she herself admitted later that it was most likely due to her cape, which was to be pulled from her by one of her dancers, being tied too tightly. Twenty-three of Madonna’s cape-tightening team have subsequently disappeared, while another two have been located in Mexico and Roscommon, bringing to mind the great ‘wrong shade of orange leg-warmer’ purge of ’88, when 112 assistants were exiled for various calfwear mishaps while on tour in Portugal.

A youTube clip of the incident has, at the time of going to press, been viewed over 19million times, making it the 7th most popular youTube clip of all-time in Ireland. One individual, Mr. Jason Spratt (72), a plasterer from Kilkenny, has watched it an incredible 9,412 times, despite only having dial-up internet services in his mobile home in a remote field in the Wicklow Mountains. ‘I do like watching Madonna’, he said. ‘And people fallin’ down stairs’, he added.

2) Foster and Allen kissing backstage at the Tullamore Craic Festival in 1972.

7) Madonna falling at the Brit Awards.

9) An oul’ one shouting ‘Ah here, leave it fu**in’ out’ at two lads fighting in Dublin.

10)  A young lad getting caught robbing trainers (sneakers) and being headbutted repeatedly by his mother at The Liffey Valley Shopping Centre in Dublin .

Words by Bosco Coppell, Picture kindly loaned by the Enniscorthy Museum of Ostriches and Other Exotic Birds.

At The Mike Stand with Brona Crehan.