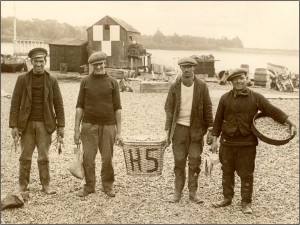 The lads on their way fishing.

We were all fishermen. Me, my brothers, my uncles, even mam would come out on the boat with us. Not Dad though. He used to think the seagulls were staring at him. Later, he developed an intense fear of being attacked by an octopus, so he stayed home, making jam all day. It was hard work, the fishing, not the jam-making, 14-hour days, six to seven days a week. Where we lived didn’t help. We were from Tullamore, County Offaly, which is in the middle of Ireland, so to get to Donegal, it was a nine-hour round trip every day. After years of this, we moved to the USA. What could go wrong for a fisherman there? The Pacific on one side, the Atlantic on the other, perfect! So, we moved somewhere that would be equally close to both oceans. Nobody told us though, that Kansas was so far from the water that some folks called it ‘The Tullamore of America’. It was a 19-hour drive to either coast. I gave up after a while. A neighbor used to give me a lift the first four miles, but then I had to hitchhike the other 1,573. Now I work in a biscuit factory, it’s alright, they let us keep the broken ones. I f**kin’ hate biscuits though”. – Horace (49) Offaly, now Kansas.