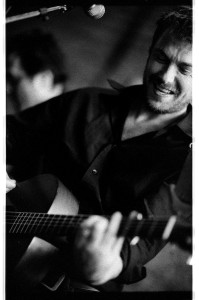 Mark Geary’s been there. He’s also done that, and while not wearing the actual t-shirt, he may well have written a song about the experience instead. Having arrived in New York City’s East Village in the early ’90s, the transplanted Dubliner soon became immersed in the city’s live music scene, and was, before long, rubbing shoulders and swapping set-lists with the likes of Jeff Buckley and other upcoming stars. During the subsequent two decades, he’s developed a reputation as being one of the most inspiring, hard-working and passionate performers out there, one who’d write a tune as quickly as lend a guitar string to a fellow artist in distress. At first playing iconic downtown venues such as Sin-E alongside the late, lamented Buckley, Mark has progressed, developing his style to suit his ever-growing audience and the advancements in his personal life, as well as his career in music. Often associated with fellow stalwarts of the New York scene Brendan O’Shea and Jenna Nicholls, two long-term friends and fellow NYC-based talents, with whom he’s shared many a stage with, he’s also performed with Joe Strummer, Glen Hansard, Elvis Costello, The Pretenders, Coldplay, Josh Ritter and many others. An accomplished songwriter and composer, he also created the score for the award-winning 2005 movie ‘Loggerheads’, and along with fellow Irishman Karl Odlum, wrote the music for 2010’s ‘Sons of Perdition’. With four studio albums, two live recordings and several collaborations (including his own tune, ‘Christmas Biscuits’ with long-time friend and collaborator Hansard) already released, Mark will play several dates in New York in the coming weeks to road test a number of tunes from his upcoming, asyet untitled, album. Mr. Geary, welcome to ‘At The Mike Stand’. By Michael Fitzpatrick.

Catch Mark Geary perform live at: The Living Room (Brooklyn) on April 3rd, The New York Irish Center in Long Island City (Queens) on April 4th, and at this writer’s favorite bar in the world The Scratcher, on Manhattan’s East 5th Street, for a free show on Sunday April 5th. Mark, welcome to At The Mike Stand.For more extensive gig details, with addresses, ticket information and so on, check out the artist’s website: markgeary.com.

I kinda like the idea that the tribute act might be better than me, ‘Mark Geary Done Better Tribute Act’, has a ring to it

Probably Mark Helprin, author of ‘A Winter’s Tale’ (Which has since been made into a movie starring Colin Farrell, Russell Crowe and Will Smith – Editor).

The Count of Monte Cristo

I’ve been touring a lot through Switzerland, I’m stunned by how beautiful it is, there is an order and a calm to the place, that is both reassuring and baffling

I’m not sure I buy into the whole ‘never meet your heroes thing’. There is an idea that perhaps it’s because your heroes weren’t that impressed with you.

I was listening to a radio interview with an Irish politician, who clearly hadn’t read the new party’s press release. It was toe-curling and tragic and f***ing funny, in equal measure

I get to see lots of music, bands I think play more now than ever, because basically they have to, records sales have gone, so you work and tour for as long as you can. I saw Bruce Springsteen, Bon Iver, Fleet Foxes and Radiohead all in the space of a few weeks, but sometimes I go months without seeing anything, I just kinda shut myself away from it, so I hear what I’m trying to write. Other times I listen and listen to everything, I write and read everything, in order to rob all the ideas I love.

I’m a Man Utd fan, should I talk about that this year?? No no, my heart has become hardened and cold, there is no joy, just an awful sinking feeling, kinda like what a Liverpool fan feels every year!!!!

Not sure visited, or perhaps a really quick visit, but I’m pretty into history and World War Two. ‘Band of Brothers’, ‘Fury’, not a bad film, it showed the war from the perspective of a tank crew, so required reading is everything by Stephen Ambrose, who wrote ‘Band of Brothers’, ‘D-Day/Citizen Soldier’, just fantastic writer. Woody Allen has a line; ‘In the event of war, I’m a hostage’.

Hmmm, well fear always is a good indicator that its time to leave a room, or run from a room. I’m not a fan of bullies and arrogance, that can make me leave a room, I’ve often had to throw a little comment in their direction before I leave though.

Oh god, a lot of times. I wished I had walked out of that Terence Malick film, ‘The Thin Red Line’? I think it lasted longer than the actual war, and took place in real time, agony. I think I might have left that “Will Smith and his kid movie, ‘After Earth’ oh my God what a pile of s**t!!

Oh I guess I’d like to see how I got on doing a war movie. Which guy I played, everyone wants to be the hero,  and I guess no one ever wants or sees themselves as the geeky nerd with the computer!! I did do a movie ( a horror ) with Christopher Walken and all i wanted was to stay alive in the movie and say some lines.

Oh please please don’t ask me! I get really odd ones. I’m cringing even saying this- hahaha there has been moments of Ronan Keating, and then there’s a Jamie Oliver thing, I’ll leave it there!

This sounds like such bollocks and hipster, ( a word I’ve come to hate) but its true, I shamefully stole a “ street legal” Bob Dylan record from a charity shop, years later I bought the charity shop, (that’s not true).

Mmmmm,  I happen to like mine, but my favorite is ‘The Little Drummer Boy’, by David Bowie and Bing Crosby.

Oh its no secret, I don’t get into guilty listening and all that. Cheesy pop, awful country and western, the more “tears in beers” the better, soft rock ballads all of it. If its a proper song it will be ok.

Theres not a lot that I do read again, but ‘The English patient’ and ‘100 Years of Solitude’, I’m also actually re-reading ‘The Virgin Suicides’, the book just destroys me, beautifully written, tragic.

I have a suspicion I wouldn’t be in it.

‘The Godfather Part 2’ and ‘On the Waterfront’.