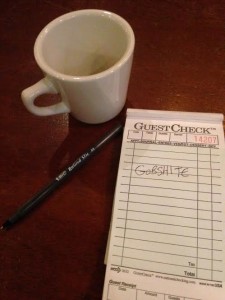 A grande disappointment with a dash of bitterness and some semi-skimmed utter dismay is on the menu at a Starbucks restaurant in County Wexford, after it was discovered that a local man, who’d been spotted there every day for the past nineteen years typing furiously on his laptop, was not a real writer.

The man, named locally as Dave ‘David’ Fitzgibbon (27), had been a regular customer at the Enniscorthy branch, since 1996, and each day as the venue opened, he’d be the first customer in the door, where he’d order his usual tipple, a grande no-foam, semi-steamed mocchatino with nutmeg and a sprinkling of paprika (for his ulcer). He’d go on to seat himself in the location’s prime table, a four-top by the bay-window, looking out onto the town’s bustling Main Street, nodding to passers-by who gazed in awe at a real writer plying his trade before their very own eyes. Now however, the town, and indeed, the staffers at Starbucks, are distraught and angered as it turned out that Dave was not a real writer at all, but was in fact, a failed typing student from the nearby Samantha Gomez School of Secretarial Studies.

Says Pete Mitchell, manager at Dave’s former hangout; ‘I don’t understand it at all. He even had a stupid beard and them big glasses that lads who don’t even need glasses wear. He’s taken the best table in the joint and bored the arses of fourteen generations of waitresses, even telling us that he was once on the Westmeath Herald’s Bestsellers List. He’s some bo**ocks, I’ll tell you that’. Since his ruse was discovered, Dave, who once listed his inspirations as Jack Kerouac, Bob Dylan and Jackie Collins, has not been seen around town, and has even failed to show up at his secretarial course, where he is in danger of losing his deposit on a typewriter he rented back in 2004.

At The Mike Stand with Mark Geary

Survey Finds Most Irish Americans Have Never Heard of Wexford.