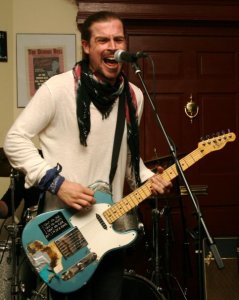 You know, it’s not easy pinning down these singer/songwriter types. One doesn’t just wander into an East Village coffeehouse like the old days, and bump into the likes of Bob Dylan, Cat Stevens and Tim Buckley discussing the works of Byron over a steamy latte or two. Good Lord no, those days are long gone. Take this edition’s entrant to the ‘At The Mike Stand’ hall of fame, Colin Smith for example. Colin, or, The Smithmaster General, as perhaps nobody has ever referred to him, has been writing, performing and recording in New York City for over a decade. As the lead vocalist, principal songwriter and guitarist with transplanted Dubliners MrNorth, Colin, along with his bandmates, Oisin, Emmett and Aido, are currently riding high on the success of the release of their recent CD, ‘MrNorth Live in New York’. With a solo album also in the pipeline, as well as a number of gigs, both as a member of MrNorth (July 28th at downtown Manhattan venue Ulysses) and as a one-man act, Colin’s been quite a busy chap. Lucky for us however, he did take a few minutes out, to join us ‘At The Mike Stand’. Colin, welcome to the pages of The Irish Examiner. By Mike FitzpatrickPicture by Teresa BrinkWho’d be in your fantasy supergroup? That’s a good one, let’s see. I’d love to have Paul McCartney on bass, Bill Bruford of Genesis/Yes on drums, that’d be interesting. No, make it Dave Grohl on drums and Jeff Buckley on guitar. What act would you like to have seen perform live? The three-legged woman from the circus. What would a Colin Smith tribute act be called? His Baldness.What song would you like to have written? ‘Happy Birthday’, I’d be worth billions. What team(s) do you support? Manchester United and the New York Mets.Who or what, would make you leave a room? (Conservative political commentator) Sean Hannity. What decade rules? The 1930s. What movie role would you like to have played? The child-catcher in ‘Chitty Chitty Bang Bang’. Have you ever been told you looked like somebody? Yes! Through my life it’s been different, but most recently it was the bad vampire from ‘Twilight’. What’s the first album you remember buying? The soundtrack to ‘Oliver’, the musical. I bought that, I was obsessed, I thought I was Oliver. That was the first song I learned to sing, ‘Where Is Love’, and on my solo record, I incorporated that phrase into the end of one of my favorite songs from the album. Who’s your favorite Beatle? Paul. What’s your favorite Christmas song? ‘The Little Boy That Santa Claus Forgot’Who’s the most rock and roll person who ever lived? Iggy Pop. What artist/song/genre do you secretly enjoy listening to? I don’t really feel ashamed for any music that I like. If I think something will piss people off, I’ll like it even more.What book can you read again and again? ‘Anthem’ by Ayn Rand. What movie can you watch over and over again? ‘Lawrence of Arabia’. Who’s your favorite cartoon character? What’s the dog with the long face? Droopy!What’s the greatest place you’ve visited? The Grand Canyon. What’s mankind’s most irritating invention? The 24-hour news channel. Who’s the funniest person who ever lived? Aido (Mr North’s drummer) is up there. Maybe one of the writers from ‘Will & Grace’ or some show like that. (There followed a lengthy debate between Aido, Colin and the interviewer about the merits of The Marx Brothers, Ricky Gervais and about 812 other ’funny people’). To be funny without doing anything is amazing. For lack of a better example, I’ll go for Jim Carrey. Who’d you most like to have met? Richard Harris.