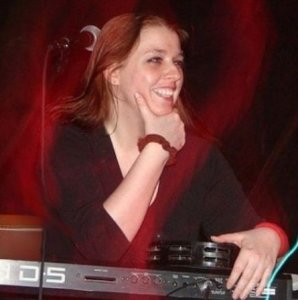 To even the most casual observer of the New York music scene, the face, not to mention the voice, and my goodness what a voice (the thought of it even made me type ‘my goodness’) of this week’s ‘Standee’ is a familiar one. Sue Wendelken is currently the featured female vocalist for the Andy Cooney Band, as well being a regular vocalist on sessions with Irish acts such as Celtic Cross, Good Clean Fun and Billy Keenan’s Primetime Showband. A busy girl, she also finds the time to front Irish-rock project The Ride and the all-girl metal band, Dormitory Effect (when does she get to do the housework, one wonders?). Her music has appeared on The Howard Stern Show and ESPN’s ‘X Games’, and Sue herself’s been featured on the ‘Jim Breuer Unleashed’ show on Sirius Satellite Radio. A staple of the Irish rock and trad scene since the late ‘90s, when she teamed up with local legends such as Dave Barckow, Donie, Pio and Noreen Ryan and Kenny Mannion with Alternatrad, Sue’s gone on to perform at many festivals, opening for acts such as Shane MacGowan, Blink and The Revs, and singing with Paddy Noonan, The Whole Shebang, Cherish the Ladies and The Prodigals. She’ll be appearing this Saturday at the Mill Creek Tavern in Bayville, NY. Sue, welcome to ‘At The Mike Stand’

I don’t know, but I hear those bands command top dollar, so I’d like to be IN my own tribute act.

This weekend my 2 yr old niece Siobhan was telling my dog to sit, but it really sounds like she’s yelling “S*it!”

Triple Bill: Led Zeppelin, Thin Lizzy and The Beatles while all original members were still alive.

I have family from Mayo, Leitrim & Cork, so I’m happy when any of these counties win a match, and for baseball – LET’S GO METS!!!

Wish I could visit Haight-Ashbury (San Francisco) in the late 60’s.

‘Jolene’ by Dolly Parton. That song breaks my heart over and over again.

That is hard! I’d say the 1960’s because most of my favorite music was born out of that era.

‘As I Roved Out (Night Visit)’, because it’s just a little bit dirty.

I think it was an old Aerosmith ‘Greatest Hits’.

Aw come on, that’s like asking a mother to choose her favorite child (it’s not Ringo though).

‘Father Christmas’ by The Kinks.

It’s gotta be either Ozzy Osbourne, Keith Richards or Peter Maguire. They’ll outlive us all.

Faith No More – one of the best bands of all time, very underrated, incredible vocalist (Mike Patton) and it’s hard to even put them in a genre; especially their last two albums.

You know I keep trying to meet Johnny Depp, but he won’t take my calls.

You’re making me make some tough choices here! I really don’t think I could live without “Tom Waits – Nighthawks At The Diner”.

Edina Monsoon, we both just want to be invited to Sting & Trudie’s for Christmas.

Carl from ‘Aqua Teen’. I don’t know if it’s his hairy arms (and shoulders), or his green flip-flops, or the way he lovingly recalls a Foreigner concert from 1982, but I just can’t get enough!

I think Amsterdam, but it’s all a bit hazy.

The Piano. No, wait. The Snuggie? No, it’s gotta be the piano

‘Auto-Tune’ – Single-handedly destroying modern music! If you don’t know what that is, it’s the thing that makes someone with a bad voice sing in-key and makes human voices sound computer-generated

That would either be Richard Pryor or George Carlin.