The Pogues Are Pumped! 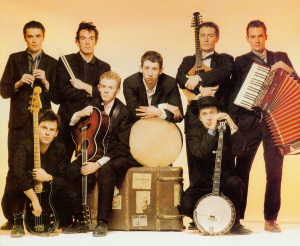 Mike Fitzpatrick Talked To The Band As They Began Their U.S. Tour

Philip Chevron is pumped. The multi-instrumentalist songwriter, fifty-years old later this year, has retained his boyish outlook on life, and is clearly very much looking forward to more time on the road with The Pogues, a band he’s played guitar, banjo, mandolin and sang with, on and off, for over twenty-two years.

The man who wrote classic tracks such as ‘Thousands Are Sailing’ and ‘Lorelei’ took a little time out from the band’s demanding schedule to speak with The Irish Examiner from Boston last week, and made it quite obvious that The Pogues, for all their hard-drinking, tough-talking and wild-living over the years, the band has lost none of its edge, little of its enthusiasm, and not a hint of its reputation as one of the best live acts out there.

Having returned Stateside, following a triumphant venture across the Atlantic twelve months ago, Chevron, Shane MacGowan and the boys are playing several nights on the East Coast, and at press time, had already performed two dates in Chicago, four in Boston, and were hurtling, practically tornado-like, towards New York for three shows at The Roseland Ballroom (March 14th, 15th and 17th), as well as a gig in Philly, at The Electric Factory, on the night before Saint Patrick’s Day.

Things are good in Pogueland, despite the boys, as well as the aforementioned Chevron and MacGowan, the classic lineup of James Fearnley, Jem Finer, Spider Stacey, Andrew Ranken, Terry Woods and Darryl Hunt are all playing the tour, approaching middle age, they retain the youthful exuberance for their live performances that they’ve had since way back in the early 1980s.

‘We played in Chicago for the first time in fifteen or sixteen years’, said Chevron, ‘It was a great audience, Chicago wasn’t included in last year’s tour, we’d a great time. We’d been there many times before, and I’ve often taken the train from Chicago to San Antonio to visit friends’.

Having commenced with the American series of tour dates in the Windy City, the Dublin-born Chevron was thrilled to be back in a city which holds so many memories not only on a personal level, but also for the band. New York City though, well, that’s a tale that is slightly different. ‘The Pogues in New York City on Saint Patrick’s Night, it doesn’t get much better than that’, claims Chevron.

The guys have played The Big Apple many times over the years, and their March 17th gigs have become somewhat legendary, selling out venues on a regular basis, with not only veteran fans getting in line, but also a new breed, a generation which was barely out of diapers when the band recorded ‘Red Roses For Me’, the group’s first album, way back in 1984.

Indeed, it is material from this recording, now near-legendary tracks, such as; ‘Transmetropolitan’, ‘Poor Paddy’ and ‘Down in the Ground Where the Dead Men Go’, that have become classic staples of many a raucous Pogues performance. Although having left the group for a short time in the mid 1990s, stressing his desire to return to more traditional Irish music, Philip Chevron has played with them, first as a replacement for guitarist Jem Finer in 1984, when Finer left the band temporarily when his wife gave birth, then as a full-time member, when MacGowan decided to focus on vocals full-time, for over twenty years, and has traveled with the group high into its peaks and down to its valleys during that time.

Having been formed by MacGowan, Stacey and Fearnley originally as a three-piece in London, in the early 1980s, the trio soon had Finer, Ranken, and former bassist, Cait O’Riordan added to its ranks, and in 1984, were invited to play support on The Clash’s tour. After famously changing its name from Pogue Mahone (the Irish language version of ‘kiss my arse’) to The Pogues, the band released ‘Red Roses for Me’ in 1984, following it up with the critically-acclaimed ‘Rum, Sodomy and the Lash’ in 1985. The album title is part of a quotation often attributed to Winston Churchill, in describing conditions in the British navy. The album was well-received, and saw the band move onto a new level, and rather than merely playing cover versions, several of the band’s most well-known tracks first appeared on this recording.

Indeed, it was around this time that MacGowan’s eminent songwriting first appeared. With his poetic story-telling in tunes such as ‘The Sickbed of Cuchulainn’ and ‘The Old Main Drag’, added to now widely known versions of Ewan MacColl’s ‘Dirty Old Town’ and ‘And the Band Played Waltzing Matilda’ by Eric Bogle, both of which are now probably the most well-known versions of those songs, the recording was a critical success.

Despite the triumph of the album, the group was headed towards troubled waters. O’Riordan left the band, marrying Elvis Costello (they’ve since divorced), their record company, Stiff, went bankrupt shortly after the release of the single, ‘The Irish Rover’ with The Dubliners, and the unpredictable behavior of the band’s chief lyricist and visionary Shane MacGowan was beginning to cause ripples of unrest among the other band members. 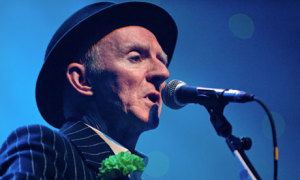 They weathered the storm however, and in 1988 recorded its most commercially successful album, ‘If I Should Fall From Grace With God’, which spawned the enormously popular duet with Kirsty MacColl, ‘Fairytale in New York’, recently voted the best Christmas song ever in a VH1 UK poll. 1989’s ‘Peace and Love’ follow-up continued the band’s riding of the waves of success, hitting number five in the UK album charts, although following the release of 1991’s ‘Hell’s Ditch’, MacGowan and the band parted company.

Punk legend Joe Strummer, whose band, The Clash, The Pogues had supported earlier in their career, helped out on vocals for a short time, before Spider Stacey took over on a more permanent basis.

Things were obviously never going to be the same without MacGowan at the helm however, and not long afterwards, despite a hit single with ‘Tuesday Morning’, with just a handful of original members left, the group disbanded. With the individual members all moving on to their side projects, for a time it appeared as if the days of The Pogues, with Shane MacGowan handling vocal duties, were long gone. In 2001 however, they were brought back together for a Christmas tour, and in 2004, played several dates together in the UK.

In 2005, ‘Fairytale of New York’ was re-released, reaching the UK top five once more, showing the song’s enduring popularity. It was March of last year though, that the entire band got back together, with the entire lineup playing with MacGowan for a series of sold-out shows in Washington D.C., Boston and New York, and later that same year, they returned Stateside to play in Los Angeles, San Francisco and Las Vegas. Awarded the lifetime achievement award at the Meteor Ireland Music Awards last year, many fans remain hopeful that new material is in the works.

Chevron insists however, that although there is a possibility of a new album being recorded in the future, ‘Like everything in The Pogues, if it happens, it will happen. Once the stars are aligned. We never really have any plans to do anything next, (and that’s) the reason that the reunion has been so successful. Nobody has felt trapped into being in a band again’.

With what Chevron describes as ‘the classic ‘If I Should Fall From Grace With God’ lineup back in action, New York City awaits a series of thundering performances from The Pogues, one of the ‘Fifty Bands You Must See Live Before You Die’, according to Q Magazine this week. The Pogues playing live in New York City on Saint Patrick’s Night? Mr. Chevron perhaps you were correct, things don’t get much better than that.