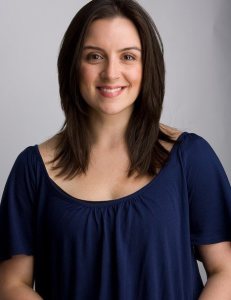 There’s not a lot that can be said about Nicole DeCario that hasn’t been said before, well, at least by us, see, being in the newspaper business, we do enjoy the occasional morsel of backtalk, chitchat and, well, idle gossip (that’s gossip which doesn’t carry out its chores in case you were wondering). The award-winning singer tells us that she’s been harmonizing, vocalizing and, em, doing other things that are fancy words for singing, almost since before she could talk. Having appeared in several Off Broadway productions and performed at various venues around Manhattan, the University of Miami graduate is currently working on producing her debut CD, and preparing for a major show at the Laurie Beechman Theatre this coming January. While you’re waiting, check out some of Nicole’s performances for the ‘Tunes for Tatas’ breast cancer fundraiser, on YouTube. Despite all this going on however, the lovely Nicole was good enough to sit down for a few minutes and answer a couple of breathtakingly silly questions for us. Ms. DeCario, welcome to ‘At The Mike Stand’.

I don’t know the name just yet, but I sure do hope it’s a Drag Queen!

I do that every day!

I would like to have witnessed Jesus’ miracles. I’m a skeptic.

“Happy Birthday”- it will be around forever!

What do you sing at weddings?

I love singing “At Last”- it is perfect for the occasion and you really get to belt it out!

Not a movie role, but I totally should have been Meadow Soprano!

Not very often, but I’ve gotten Megan Mullaly (Karen from ‘Will & Grace) a few times.

I remember buying (well I remember my Mom buying) Whitney Houston’s first album. I was 5 and I would sing “The Greatest Love of All” non-stop. I knew every word to every song on that cassette tape!!

Way too many to pick! Though, I do have a Christmas playlist that I listen to all year round and I think Mariah Carey has the best Christmas album EVER!

I love listening to spa music- that ridiculous elevator-like music is so calming.

I would love to sit President Obama down for a chat.

I was a spelling bee champion in 4th grade.

What TV character can you most identify with?

Currently…I don’t necessarily identify with her, but I so want to be Olivia Benson (Law & Order SVU)!

That’s a pretty big title to have… I think Jon Stewart is pretty awesome and Rodney Dangerfield was hysterical!

Honestly cannot think of one!

Scout Finch (To Kill a Mockingbird).