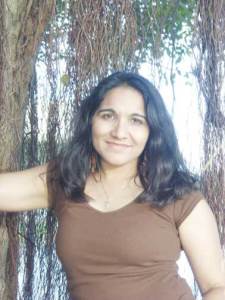 Although music reporter Natalie Herman was born in New York (of Spanish and Indian descent no less), she considers herself “Irish by desire.” Having been fascinated with Irish culture for over fifteen years, and since discovering the Irish independent music scene (not that it was her who founded the genre of course, well, you know what we mean), she has immersed herself in Ireland’s contemporary artists in addition to the greats such as Joyce, Wilde, and Heaney. Since February of 2008, Natalie has worked alongside Shawn Fitzmaurice, as the news reporter for Paddy-Whacked Radio™  (to be found athttp://www.pwradio.net ), tirelessly fighting in the corner of many an independent musician, spreading the word and giving them that much-needed shot of publicity. When not listening to, writing about, or collecting music, Natalie can be found reading, drawing, painting or camping in South Florida, which she calls home. Miss Herman, welcome to ‘At The Mike Stand’.

A tribute act? For me? Would likely need to be called A Good Psychiatrist.

When’s the last time you laughed out loud?
Reading Christopher Moore’s “Fool.” Laughing out loud is what I do best.

What act would you like to have seen perform live?
I almost got to see Frank McCourt do a live reading, and I regret that I missed my chance.
Musically, I have been really lucky to have gotten to see some really great bands and most of my favorites. When The Police reunited in 2007, I fulfilled a longtime dream. I look forward to seeing The Frames / The Swell Season live too.

What team(s) do you support?
I don’t really do sports. I cheer on the teams that my friends love. So The Lakers and Liverpool FC. But I have a soft spot for some people who support Man United.

What period in history would you most like to have visited?
I’d have liked to catch a U2 show when they were still struggling.

What song would you most like to have written?
“Hallelujah,” by Leonard Cohen, I think. Although the majority of songs by Rick Springfield, U2, and Michael Brunnock make we “wish I’d written that.”

Who or what, would make you leave a room?
Racism, or other stupidity being spouted off at the mouth.

What decade rules (and why)?
80’s. The hair and fashion, while laughable when looked back upon, is still cooler than a lot. And the music just lasts.

What cover version do you most enjoy performing?
I don’t perform, but I do collect covers of Leonard Cohen’s “Hallelujah” and will encourage everyone I know to send me their version. Even if they just call me and sing it over my voice mail!

What movie role would you like to have played?
Jo in “Little Women”.

Have you ever been told you looked like somebody?
Just my auntie. And there was a girl in my 6th-grade science book that could have been my twin.

What’s your favorite Christmas song?
“It Wasn’t His Child” by Skip Ewing. Over the past few years, I have tended to lean more toward the religious Christmas music. I love “Mary Did You Know?”

The Edge. Cos brainy rockers are incredibly attractive.

What artist/song/genre do you secretly enjoy listening to?
There is no secrecy about the music I like. On shuffle, my iPod can loop through The Monkees, The Ramones, Jane’s Addiction, Michael Brunnock, Mary Chapin Carpenter, Aerosmith, Bob Dylan, Quincy Jones and Ricky Nelson in an hour. People are amused that I actually have N*Sync on there, though.

Who would you most like to meet/have met?
Abraham Lincoln, Frank McCourt. I’d love to have a chat with Larry Mullen.

What book can you read again and again?
I haven’t really re-read a lot of books since I was a teen. It’s been more an attempt at moving forward. I have read A Confederacy of Dunces, by John Kennedy Toole, a couple of times. Ireland: A Novel, by Frank Delaney is one whose story will be with me for a long, long time.

What’s the greatest album ever recorded?
For me, there are so many “perfect” albums – where every song is just amazing and they all go well together. But for my answer, I will choose “Achtung Baby.” Ask me tomorrow and it might be different.

What artists would you most like to have played with in the band of your dreams (supergroup)?
I’m still holding out to see Michael Brunnock (guitar + vox) , Gavin Fox (bass), and Pete Wilhoit (drums) perform together.

What do few people know about you?
For kicks, I like to teach myself foreign languages. I can turn a phrase in about 15 different languages.

What sitcom character can you most identify with?
Dorothy Zbornak from The Golden Girls

What movie can you watch over and over again?
Monty Python’s ‘The Holy Grail’. And ‘Stand By Me’.

What’s the greatest place you’ve visited?
New York City, no doubt. I haven’t been to Ireland yet.

Who’s the funniest person who ever lived?
John Ritter, RIP, was essential in the crafting of my sense of humor. Tom Hanks gets honorable mention and Wil Wheaton cracks me up. But Eddie Izzard makes me wheeze and cry, even while watching something I have seen 100 times.

Who’s your favorite namesake?
My mom named me after Natalie Wood. She was an interesting lady. I do appreciate Natalie Portman, though.