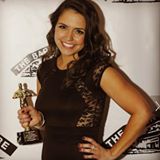 You know, we’ve really got to have a word with the guy in charge. All this hanging out with hot young actresses such as this week’s ‘Standee’, Lauren Klemp, well, it really takes its toll on a guy. Well, it doesn’t really, so don’t be going saying stuff to the boss now, you hear me? Otherwise we’ll be back to doing that god-awful gardening column, and turnips and parsnips are no fun this time of year. Anyway, Jersey girl Lauren’s wanted to be an actress since she was eight-years old. Having pursued drama studies throughout high school, she went on to graduate from Fordham University with a degree in Theatre. Since completing her studies, she’s worked with the Moscow Art Theatre at NYU’s Stonestreet Studios, as well as having had roles in a number of music videos and short films. More recently, she landed a lead role in the feature film, ‘Last Days of Simon’, which won the prestigious ‘Best Home Grown Feature’ award at the Garden State Film Festival, and recently took home the award for ‘Best Featured Actress’ in a play she starred in called ‘Run For Your Wife’. Next up is the role of ‘Susie’ in ‘Wait Until Dark’ at New Jersey’s Bickford Theatre in January/February. Lauren, welcome to ‘The Mike Stand’. Susie in “wait until dark” at the Bickford Theatre in nj January/February.

Who would be in your supergroup?

Janis Joplin on vocals, Fiona Apple on vocals and piano, David Gilmour and Angus Young on Guitar, Roger Waters on Bass, and then just fill in the rest of the band with members of Muse and Radiohead.

When was the last time you laughed out loud?

This weekend.  I took my boyfriend to a Russian restaurant in Brighton Beach for his birthday, and there was this 70 something year old man who karate chopped his way through the dance floor.  This man was dead serious, and his moves were fierce! He was hilarious to watch, and surprisingly hard to keep up with!

What act would you have liked to have seen live?

I am not much of a sports person, but I guess if I had to pick, I would side with whatever New York team was playing.  Unless they are playing against a New Jersey team.  Then I gotta represent the home state.

What period in history would you most liked to have visited?

I would have loved to live in the 70’s.  I love the style and the music! Everything was just so funky!

What song would you have most liked to have written?

Who or what would make you leave a room?

Loud-mouthed, obnoxious people.  I have no tolerance for annoying idiots!

The 80’s ruled!! When I think of the 80’s, I think of fun! The movies were great, tv sitcoms were classic, the music was fun, and the style was absolutely insane. Just a total party.

Jenny, from “Forest Gump” and Scarlet from “Gone With the Wind”.

Have you ever been told you look like somebody?

I am told I look like everyone! I used to get Christina Ricci all the time.  Now I get Rachael Ray a lot.  I have been told I look a little like Angelina Jolie once or twice, not so sure that I agree, but I am definitely flattered!

What was the first album you remember buying?

My first CDs were “Beauty and the Beast”, and Michael Jackson’s “Dangerous”.

Who is your favorite Beatle?

I love George, but John is too amazing not to be my favorite.

Who is the most rock and roll person who ever lived?

I listen to a lot of sappy, girly music, and really cheesy 80’s power ballads.

Who would you most liked to have met?

“The World According to Garp”. John Irving is a genius.

Pink Floyd’s “Dark Side of the Moon”.  It’s like listening to a movie.  It has a beginning, middle, and end, and by the time the last song finishes, you want to start it over and go on the journey again! It’s one of the true modern masterpieces.

I think that I would have to say Al from “Married with Children” and Eric from
“That 70”s Show”.  Is that weird?

What movie have you seen the most times?

“The Princess Bride”.  No question.  Has been one of my favorite movies since I can remember, and I can quote the entire thing!

It’s really a three way tie between Garfield, Ren from “Ren and Stimpy”, and Cartman from “South Park”.

What is the greatest place you have ever been to?

Aside from the internet? Indoor plumbing.  I don’t even want to think about what life was like before flushing toilets and running water.  Nasty!

Who is the funniest person who ever lived?

I think Robin Williams is hilarious! He just keeps going and going!