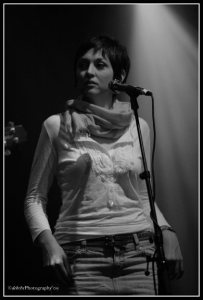 You know, we really ought to quit opening this piece with the phrase; ‘’You know’, but also, this week’s ‘Standee’, Jenna Nicholls, is one of those girls you really should be jealous of, but couldn’t possibly be. Unless of course you don’t particularly like the Pittsburgh Steelers, and they keep winning stuff, then you could perhaps be a tad envious of Miss Nicholls (she’s a fan you see). A phenomenal singing talent, the Pittsburgh native, since transplanted in New York, and now a staple of the live music scene, is one quarter of the New York City-based musical act, Fairplay Collective, alongside fellow artists, Michael Brunnock, Brendan O’Shea and Mark Dignam. Fairplay Collective, is an organization/group/movement, made up of Irish immigrants and US natives, which came together several years ago in New York City as a new musical venture, designed at helping fellow artists out with songs, ideas, gigs, equipment and all-round mutual support. Founding member Jenna’s next local (solo) gig is at the downtown venue, Rockwood Music Hall (Allen Street between Houston and Stanton) on Sunday, May 18th (at 8pm), sure we might even see you there. So without further ado, and even less adon’t, Jenna, welcome to At The Mike Stand.

Almost Genius (!).
When’s the last time you laughed out loud?

About 10 seconds ago, while wondering what my tribute band name would be called.

Ray Charles during the Atlantic years performing with his backup singers “The Cookies”.
What team(s) do you support?

Any team from Pittsburgh, my home town. Go Steelers!!

The early 60s in Greenwich Village, or 16th Century England.
What song would you most like to have written?

There are too many to choose from, I tend to live my life in envy of others.
Who or what, would make you leave a room?

I’m pretty shy actually, so it wouldn’t take much. I’m not a big fan of large crowds and small talk. I also love to sleep so that usually makes me leave the room rather early too.
What decade rules (and why)?

I’d have to say the 1960s, it was a great time for music, fashion, freedom of expression, and no cell phones.
What cover version do you most enjoy performing?

I love covering old jazz standards like ‘Stormy Weather’, or ‘Prelude to a Kiss’.
What movie role would you like to have played?

Scarlett O’Hara in ‘Gone with the Wind’.

People tell me I look like Liza Minnelli, or Audrey Hepburn (it’s the hair) I hope people are referring to Liza at 30 and not at 60.
What’s the first album you remember buying?

Duran Duran’s ‘Seven and the Ragged Tiger’. I bought it right after I got my first “boom box” for Christmas.

I’d have to say George. John and Paul were amazing, but best as a team. George’s guitar playing was heavily underrated. I love that you can sing his solos from start to finish. 2nd choice would be Paul, it would have been John if not for Yoko.
What’s your favorite Christmas song?

‘Carol of the Bells’.
Who’s the most rock and roll person who ever lived?
Joe Strummer.

I love opera, and I’m not ashamed to admit it. I think I got most of my musical training by listening to classical music in general, but I’m a sucker for a good aria.
Who would you most like to meet/have met?

Probably John Lennon/ Paul McCartney: Once I had a dream that I was riding in a Cadillac convertible with the two of them across Nevada, we were having a great chat, it was so vivid, I remember waking up and it was like I’d actually done it. Very cool, the closest thing I’ll ever get to the real thing.
What book can you read again and again?

I don’t really read books twice, but if I had to choose I’d say “East of Eden” by Steinbeck or “The Jungle” by Sinclair.
What’s the greatest album ever recorded?

‘Astral Weeks’ by Van Morrison.
What artists would you most like to have played with in the band of your dreams?

Radiohead with the London Philharmonic , wow.

That my sister was the first child model for the Easy Bake Oven, and my other sister was published in the Library of Congress Poetry Anthology at age 13. I’ve got pretty smart and sassy siblings.
What sitcom character can you most identify with?

Grace from ‘Will and Grace’. An interior designer with a bunch of gay friends who is a complete scatterbrain.
What movie can you watch over and over again?

I think I’ve seen “The Red Shoes” about 150 times, I loved it as a kid and it’s really not that great of a movie, good dancing/ music though, but I guess I related to the idea of seeing a pair of shoes that take over your soul and make you do their bidding, like buy them.
Who’s your favorite cartoon character?

The pedicure (haha). I would have to say indoor plumbing is up there, or the printing press.

The cell-phone, the TV, the iPad.

Thats tough, I don’t know everyone who’s ever lived, but I have a couple of friends who make my sides hurt whenever I’m with them. I like people who are spontaneously funny, not really comedians.

I don’t know anyone who shares my first name. I wish I did, then I could call them and say “hey is jenna there? Its Jenna.”. And we’d laugh and laugh.