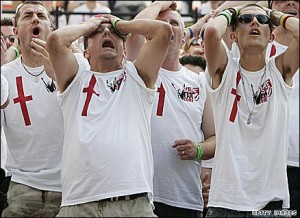 England football fans upon hearing that other nationalities will be involved at the Euros.

Fans of the England football team have voted to leave the European Championships, in fear of losing out yet again in a penalty-kick shootout. So far, over 27 supporters have left France for Doncaster, Rotherham, Hull and Sunderland, with another 9,000 to join them, once they are released from French prisons. The players will follow suit, after they lose out to Iceland in yet another heartbreaking loss on penalties on Monday afternoon (Grimsby Mean Time).

The decision was made, when it was revealed that England had lost their previous 27 shootouts at major tournaments, and even though Gareth Southgate and Chris Waddle, who had missed 43 and 7 penalties for England respectively, were not chosen in the squad due to them both being in their late ’70s, football chiefs at the FA, the fans, the players and ’80s commentators ‘Saint & Greavsie’, believe it is time to call it quits, before yet another crushing defeat.

Reporters at Britain’s tabloid papers are disappointed, as they’d already prepared headlines referring to the players which they’d adored two weeks ago, as a useless pack of overpaid bastards, who couldn’t score in a brothel with a truckload of sterling, or even a currency that wasn’t completely worthless.