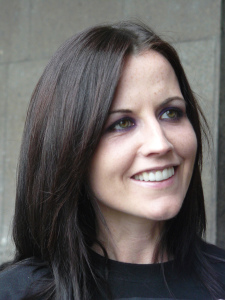 These days, there are several artists from previous eras attempting to raise their respective profiles phoenix-like, from the ashes of past glories.

Whether at the height of their careers they were lionized or lampooned is irrelevant, for 2007 seems, hitherto, the year of the musical comeback.

With acclaimed acts such as The Police, The Eagles, Genesis and Van Halen all planning tours and recording new material, and Bryan Ferry, Rage Against The Machine, Tina Turner and even Fats Domino all spotted performing live in recent weeks, it perhaps came as little surprise then, that Dolores O’Riordan, one-time lead vocalist with The Cranberries, had decided to parade her vocal talents once more before the public eye.

O’Riordan’s impressive return with her first solo album, ‘Are You Listening?’, is a full decade since she experienced worldwide success with The Cranberries, therefore suggesting that she is drifting towards unfamiliar, perhaps even perilous waters. Fans of the singer need not fear however, for the album, inspired mostly by events in her personal life, some heartbreaking (the illness and subsequent death of her mother-in-law), others joyful (the birth of her third child, Dakota), is a striking return to form by the vocalist. “My mother-in-law died of cancer shortly after I left The Cranberries, which was devastating. It was like watching a beast attack from the inside out, so the song ‘Black Widow’ is a metaphor inspired by that. At the other end of the spectrum ‘Apple’ was written about my husband and ‘Ordinary Day’ reflects the birth of my third baby, Dakota.”

On the singer’s website (www.doloresoriordan.ie), she says; “Once the first 7 songs were penned, we went into the studio and had the musicians record first. Then we took it from there. We didn’t rush it. In total, the writing and recording was a four-year period. The album was an awakening for me in my life – a journey that I completed. It’s like I crossed a bridge, which is a great new plateau to be on. My life is so different to how it was 10 years ago and there’s a great sense of acceptance. It’s a very exciting time to be releasing music again too. Song-writing is truly coming back.”

Other stand-out tracks on the album include; ‘In The Garden’, ‘Loser’ and ‘Watch the Stars’, tracks she plays alongside some ‘fantastic musicians, a great bass player, a stellar drummer and an immaculate guitarist’.

Having joined the Limerick-based Cranberries when she was eighteen, O’Riordan spent thirteen years and five albums with bandmates Noel Hogan, Mike Hogan and Fergal Lawlor, before going on hiatus in 2003, allowing her to enjoy family life with husband Don, and to raise the couple’s children, Donny, Taylor Baxter, Molly and Dakota Rain.

The album, released earlier this month, followed ‘Ordinary Day’, the first single taken from the recording, an upbeat tune not entirely dissimilar to her earlier work with The Cranberries, and precedes a North American tour, which begins in July. The Irish Examiner caught up with Dolores O’Riordan recently, where she spoke of her love of music, her family life, and how it feels to be back once more in the public eye. Being out of the limelight for several years, she’s clearly excited to be embarking on this latest stage of her career, the solo aspect. “I’d a good break, and I’ve the hunger back, the whole vibe is back. Most of the material (for the new album) was written in Canada. In winter, there’s four feet of snow there. It’s very cold, but very inspiring. I have a piano in my house, and I use the weather, the ever-changing climate to inspire me while writing,” she claimed.

Her hiatus from the rock star lifestyle was clearly a welcome break, and though satisfied to be back making music once more, she is at once both relaxed and raring to go. “It was the first time since I was a teenager, being a normal human being, away from being an entertainer. There was no pressure. I wanted to challenge myself, to see if I could be a normal mother. It was such a cool experience. I just wanted that normality. I took a break from the music and entertainment industry for the first time in my life (since joining The Cranberries),” she claimed.

Having had children, things ‘slow down a little bit’, and after the group released its greatest hits album, O’Riordan felt it was “the right time to switch off. I loved the whole idea of not being contractually bound. I kind of became myself again.”

The music scene in general however, has changed a great deal while she’s been away. “The emphasis is not on CDs anymore, it’s more on Ipods. It’s always changing, when we were teens, it went from vinyl to cassette. Good music is good music though.”

This current wave of recent publicity however, is not her first return to the spotlight in recent times. Before the release of the album, eagle-eyed music fans may have noticed a cameo appearance by the singer, in the Adam Sandler/Kate Beckinsale movie, ‘Click’, where she performed the signature Cranberries hit, ‘Linger’ in one scene.

Of her cinematic venture, she told us: “Adam (Sandler) is a big fan apparently. It was a blast, we spent ten days (on location). There’s a lot of waiting around for your scene. It’s a good laugh, and very interesting behind the scenes. Every morning, we’d three and a half hours doing make up, it makes you aware of so many different forms of art.”

Of a future in acting however, she said: “Maybe when I’m older, if it felt good at the time. I did like the whole experience, but you’d have to move lock, stock and barrel to Los Angeles.”

A move she’s not fully tempted by, given the fact that with stepson Donny now in his teens, and the rest of her brood growing up, relocating to LA could prove to be a tumultuous maneuver. Recording the album, she says, she “had a great time experimenting,” although as refrained from listening to other music. “I completely pulled myself out. When I’ve been recording myself, I tend not to (listen to music). At home, I listen to Led Zeppelin, Morrissey, when the kids are in bed, but my husband and I have very different musical tastes, so we rarely agree on what to listen to!!” Dolores’ husband, Don Burton, works within the music business himself, having once managed Duran Duran.

With ‘Ordinary Day’, currently doing the rounds on radio playlists on either side of the Atlantic, what is it that chose that track over the others on the album, to release first? “I think that that one kind of has a nice, acoustic, breezy, uplifting swing to it. I think it’s a good song to come out with first. Plus, it’s also got (a positive message). It’s uplifting. To be honest, it’s very seasonal, as well I think, it’s got the sunshine in it, it’s got this time of the year in it,” she claimed in a recent interview.

The album, the accomplished singer/songwriter’s first set of new material for four years, was co-produced by Youth and Dan Brodbeck, and engineered by Rich Chycki, and was written and recorded between the singer’s homes in Canada and Dublin. Youth, who worked on ‘Apple’ and ‘Ordinary Day’, is an acclaimed producer, previously working alongside The Verve, U2, Paul McCartney, Embrace and Primal Scream.

“He certainly brought his own vision to the table and softened the tracks without affecting their integrity or passion,” enthuses O’Riordan. It’s like she was never away.

‘Are You Listening?’ is available at all good music outlets.