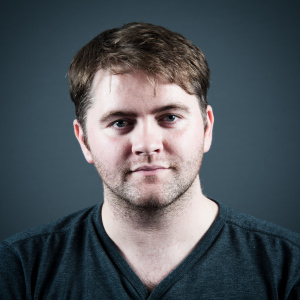 Belfast-born, London-based and New York, em, visiting, writer/director Des Kennedy, is a tad busy these days, you know. You see, he’s in New York directing the hit show, ‘The Prophet of Monto’, and sure, you know how that is, dealing with all those theatrical types on a daily basis. You don’t? Gosh and darn, see, I was hoping you’d tell me, sure they tell me nothing. Anyway, Des, a winner of the prestigious Bush Theater Award, is directing the John Paul Murphy play, which features previous ‘At The Mike Stand’ stars, Laoisa Sexton and Michael Mallomphy, at the Flea Theater (41 White Street, New York City). The show is playing until September 25th, and tickets can be bought by calling (212) 352-3101. Go on call, you can tell your friends that you saw it performed back before they all became superstars. Des, welcome to ‘At The Mike Stand’.

Who would play you in a movie about your life?

I’d like it to be like the movie ‘I’m Not There’ about Bob Dylan, where 6 different people play different aspects of his life. Mine would include; Leonardo DiCaprio, Jason Bateman, Phillip Seymor Hoffman, Lindsay Lohan, Justin Bieber and Joan Rivers.

I have a really dumb sense of humor. Me and my friends from back home are always sending each other stupid YouTube clips that make us crack-up. The last one was based on an audition. It is extremely cringe-worthy, very shocking and scarily accurate about how horrible auditions are. I was laughing so hard I couldn’t breathe. It’s called ‘Fiery Hawk’.

Nina Simone. I am a huge fan. Sometimes you buy live recordings of music and they are never as good as the studio recorded stuff. Not with Nina Simone. She really seemed to blossom with a live audience / band. I would love to have been in the same room as that remarkable talent.

For football (soccer) it has to be Arsenal and for Gaelic Sports it would be Antrim (who’ve never won a thing).

The Weimar Republic. So many great works of art were created during that time.

‘Happy Birthday’, and I’d like to have a royalty every time it was sang.

Snakes. I was once bitten in the chest by a friend’s pet python. The force of it was like getting punched in the chest. It took 2 friends to pull it off. I have a heart murmur which means I have an irregular heart-beat, so my friend’s theory was that it heard my heartbeat and thought I was a big Irish mouse. I’m now quite afraid of snakes. It makes travelling really difficult. I’m always afraid that there will be snakes on the plane.

Got to be the 80’s. John Hughes movies, new wave and synthpop, ‘Saved by the Bell’, Super Mario Brothers, and the best sitcom of all time…’The Golden Girls’.

What do you sing at weddings?

Me and my granny do a great “You’re The One That I Want” routine from ‘Grease’ at family wedding discos. It’s somehow become a bit of a tradition.

I once got told I looked like Ricky Gervais. I think the person thought they were complimenting me. I smiled graciously. Only dogs could hear the slow grinding of my teeth.

George. I doubt anyone ever says Ringo. Poor Ringo.

‘The Power of Love’ by Frankie Goes to Hollywood. I don’t know if it’s really a Christmas song, but the video is based on the Nativity and it’s featured on lots of Christmas compilation albums. It’s beautiful and always reminds me of Christmas Eve.

Shamefully, I have quite a thing for ‘Party in the USA’ by that Hannah Montana / Miley Cyrus girl.

Tallulah Bankhead. I’ve read every book written about her. She was beautiful, smart, funny, talented and lived the most interesting life. One of my favorite quotes of hers is; ‘It’s one of the tragic ironies of the theatre that only one man in it can count on steady work – the night watchman’.

Anything by Michael Cunningham. He has written about 5 novels and I’ve read them all many times. He has a new one out this year and I can barely contain my excitement.

What artists would you most like to have played with in the band of your dreams ?

I’m colorblind. Most lighting designers who I work with can tell.

Meredith Palmer from ‘The Office’.

‘Drop Dead Gorgeous’. It’s not very well known because people think it’s just a silly teen flick. It’s actually a really smart and very dark “mockumentary” in the style of the Christopher Guest movies. I think I could probably recite the entire script.

Yosemite Sam, and Elmer Fudd. I always found Bugs Bunny really annoying so I used to really root for those guys. I was an odd child.

Joan Rivers. She’s so funny and her humor is so dark and close to the bone. I love that kind of humor. That’s why I love working on ‘The Prophet of Monto’ which is opening at the Flea on September 8th starring Laoisa Sexton and Michael Mellamphy. (I was wondering how I could crowbar a plug into this interview).

There aren’t a lot of famous ‘Desmonds’, so I’ll have to say Norma Desmond as played by Gloria Swanson in Sunset Boulevard.