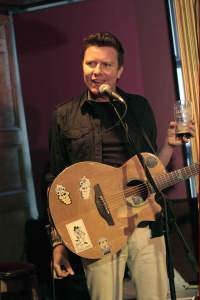 Belfast boy Dan Donnelly is no stranger to our New York readers, having carved out a successful solo career on the east coast for almost a decade. The singer/songwriter, having first come to the attention of the music press in Europe as vocalist and multi-instrumentalist with Irish indie act, Watercress, Dan moved on once the band broke up in the late 1990s. Out on his own, Dan released 2005’s ‘Bootleg’ and ‘Yearning A Living’ two years later, as well as an acclaimed live album (‘Live in NYC’) last year. Currently fronting his own touring and recording outfit, Sonovagun, Dan, a favorite at many a British festival, has played Glastonbury, Beautiful Days and The Big Session on several occasions. He’s now based in the UK, having supported Duran Duran, Ian Dury, The Darkness, The Levellers and Air, as a solo artist, and as part of Sonovagun, Joy Zipper and The Invisible Swords Men. A phenomenal songwriting talent, look out for more Donnellyesque information atwww.sonovagun.com.

I laugh out loud all the time. The world reduces me to tears of laughter on a very regular basis.

I’d love to have seen the Beatles and The Doors.

Manchester United, I know everyone will boo, but when I was young in Northern Ireland, George Best was a hero and Norman Whiteside was on the team.

‘The Witchita Lineman’, with ‘Pancho and Lefty’ a close second.

Racism, or a really bad smell.

I totally loved the 90s!! I had a blast, was in a great band and playing all over the world and was carefree as you like. The music was fantastic too, Smashing Pumpkins, Sebadoh, Dinosaur Jr plus the whole rave and ecstasy scene was great fun!!

At the minute I love doing MGMT’s ‘Time to Pretend’.

I think every kid wants to be Luke Skywalker but as an adult? I dunno, maybe The Sundance Kid.

Yeah!! I get Rick Astley and Conan O’Brien all the time!

McCartney by a long shot with Harrison second, then John, then Ringo.

I have a secret soft spot for Lily Allen.

Would love to meet Bowie or Macca or Neil Young, I’d like to have met Jesus to see what all the fuss is about.

‘Fear and Loathing in Las Vegas’ or (the work of) Bukowski or Henry Miller.

Very little. I have a big mouth and no censorship.

Has to be Larry David from ‘Curb Your Enthusiasm’, sometimes I feel just like him!!

As Johnny Cash says ‘I’ve Been Everywhere Man’, but New York was so good I moved there. I <3 NY.