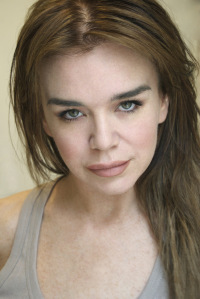 You know, this job’s not so bad sometimes. There we were hanging around the Mike Stand eating cheese sandwiches and minding every one else‘s business, when who should we bump into, only hot  young actress, Laoisa Sexton. The bubbly Dubliner is currently in New York City preparing to star in Irish playwright Paula Meehan’s play, ‘Cell’, at the Gene Frankel Theatre, situated at 24 Bond Street in lower Manhattan (opening on September 8th, tickets are available through http://www.smarttix.com).  Stepping aside from rehearsals for a few minutes, the lovely Laoisa was only too happy to join us At The Mike Stand.

Talking to my Da on the phone from Dublin this morning!

Front row seat: Marlon Brando in “Streetcar Named Desire” on Broadway.
What team(s) do you support?

I’m part of a great team right now, doing a play for the 1st Irish Theater Festival. It’s called CELL written by award winning Dublin playwright, Paula Meehan! We open September 8th at the Gene Frankel Theatre, and tickets just went on sale at Smarttix http://www.smarttix.com or throughhttp://www.myspace.com/cellthenypremiereI know- Shameless plug!
What period in history would you most like to have visited?

The French Revolution, a royal or an aristocrat (who escapes the guillotine!), I would have to be able to bring my dogs with me though! They would fit in, they are feisty chihuahuas, Hamlet and Penelope.
What song would you most like to have written?

‘Somewhere over the Rainbow’.

Depends on whose in the other room!
What decade rules (and why)?

The Sixties around 1967-1969, the films, Terence Stamp, Julie Christie, the music, the mods, the clothes, Twiggy, Jean Shrimpton, Mick Jagger, the cars. Just the fact that everything wasn’t done already like now, or so it seems!
What is your karaoke specialty?

I’ve never done Karaoke but does singing in the bath count?
What movie role would you like to have played?

I’d love to have been in a Fellini film, or “On The Waterfront”. I’d love to be in a Roman Polanski film or Mike Leigh, anything by Tennessee Williams, or Jim Sheridan. Even though I’m not a fella, I would love to have played Daniel Day Lewis’s part in “In The Name of The Father”

Yes there’s a new one everyday, everyone from Miss Piggy to Brigitte Bardot.

What’s the first album you remember buying?My Mam had all these Broadway show records I used to listen to, like West Side Story, but I think the first CD I actually bought was LL Cool J’s “Mama Said Knock You Out”.

They called him the “Fifth Beatle”- George Best, in his prime!
What’s your favorite Christmas song?

“Wish It Could be Christmas Every Day” by Slade. I love Christmas music! It is mandatory in my house to dance around to Frank Sinatra’s Christmas Collections!

Never a secret when it comes to music

Who would you most like to meet /have met?

I don’t really like meeting people I truly admire. I just love to see their work.”Great artists exist simply in what they make, and consequently and perfectly are uninteresting in what they are” Oscar Wilde. Having said that though, Elizabeth Taylor would be up there. I do love meeting anyone who inspires me.

‘Alice in Wonderland’ by Lewis Carroll, my Da says everyone from your own life is in there, he’s right! ‘Catcher in The Rye’ comes a close second..

Anything and everything by Michael Jackson. Billie Jean is the best song ever.

Winnie the Pooh, the classic version not Disney.

Reality TV although not sure if it could be classified as an invention, more like a disease!
Who’s the funniest person who ever lived?

There’s no shortage of them in my personal life, or here in NY!

Well I have a Gaelic name, so I don’t know if there is one for “Laoisa”…hey maybe it’s a one off!