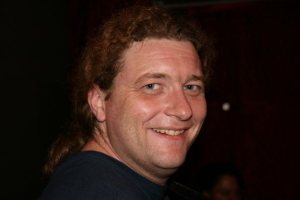 So there we were just hanging around minding our own (and most other peoples’) business, when whom should we happen upon, but local musician Allen Gogarty. Not that we’d be happening upon that many people, sure we’re not completely positive what that phrase even means, but, well, you know what we’re getting at. Allen, the singer-songwriter-guitarist (and utilizer of most of our hyphens, we’ve only four left now, thanks to this particular show-off and his multi-talented ways) is a busy man these days. The affable County Meath native’s been gigging around the Tri-State area for some time now, occasionally alone, often with a full band, and penning the occasional album when not belting out his live performances. Despite his rather hectic schedule of writing, recording, gigging and causing the occasional bit of mayhem, Allen was more than happy to sit down with us and answer the occasional incredibly nosey question for us. So, without further ado, and even less adon’t, Allen Gogarty, welcome to ‘At The Mike Stand’.

Tonight, when a waitress at The Irish Cottage showed me her ass tattoo.

I’ve got to say now, that’s quite interesting. The ‘60s in the US had to be completely nuts, you know, turn on, tune in, drop out and all that stuff.

What song would you most like to have written?
‘I Still Haven’t Found What I’m Looking For’, U2’s classic. It’s simple, heartfelt and poignant.

A very big bouncer or a very pretty girl! However, it’s normally my wife that tells me when I’m leaving the room.

The ‘70s rule, it got the hangover from the ‘60s! There was punk, southern rock, metal, progressive Irish trad, and my generation was born and we’re not too shabby.

‘A Beautiful Affair’ by Stockton’s Wing.

Coco in ‘The Run of The Country’

Have you ever been told you looked like somebody?
Yes, Mick from Simply Red, the guy who played the guitar in ‘The Commitments’ who turned out to be Glen Hansard, and Robert Plant. After that, I get a lot of people telling me that I look like Allen Gogarty, and gosh, how I giggle.

It depends on what you mean by Rock ‘n’ Roll, if you mean the music, the lifestyle, the refusal to give up, the acceptance of the unacceptable, bodily abuse, addiction, defeat of addiction, madness, mayhem and a good story to tell, then Iggy Pop’s your man.

I don’t secretly enjoy any, it’s all out in the open here! But I suppose, I don’t really scream from the top of my lungs that…ah feck off I’m not answering that!

What’s the greatest album ever recorded?
‘Appetite For Destruction’, by Guns ‘N’ Roses. At least it’s the best hard rock album recorded, the sound to date is unsurpassed.

On drums Phil Rudd, bass Phil Lynott. On guitars I’d have Clapton, Hendrix and the bastard child of Stevie Ray Vaughan and Rory Gallagher, Mozart on piano, and for the craic, we’d need O’Carolan writing the tunes. I’m singing.

Basil Fawlty, what can go wrong does go wrong. I can relate.

Even though I now live here, I still have to say New York. What a town!

The airplane, it takes weeks off your journey.

Cell-phones, nobody has a damn second for themselves anymore.

Who’s the funniest person who ever lived?
Henry Rollins.