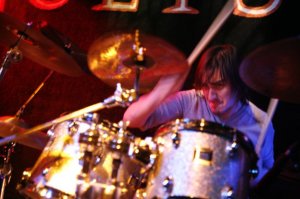 Call him a drummer, percussionist, sticksman (huh?) or bloke that rhythmically beats things to enhance a musical performance, whatever it is, Aido Mordaunt, is one of the best out there. A native of Dublin, he’s been based in New York for some time now, being a founding member of acclaimed Irish rock act MrNorth, with whom he’s toured throughout the US and Europe. As well as his more rock-based activities, Aido’s also been known as a staunch supporter and member of a number of drum and pipe bands, playing many major events over the years. We caught up with him some time ago to ask him some incredibly nosy questions, we were nice though, as he, as always, was armed with two wooden sticks. Aido, welcome to At The Mike Stand.

What would you like a Mr. North tribute act to be called?Could it be the obvious, Mrs. South. I’m sorry, I’ll have to think about that one. When’s the last time you laughed out loud?

Today. What act would you like to have seen perform live?

Led Zeppelin. What team(s) do you support?

None, absolutely zero. What period in history would you most like to have visited?

The ‘60s. What song would you most like to have written?

‘Live and Let Die’, by Paul McCartney. Who or what, would make you leave a room?

The ‘70s. What cover version do you most enjoy performing?

‘Noone Knows’ by Queens of the Stone Age. Have you ever been told you looked like somebody?

‘Holy Night’. Who’s the most rock and roll person who ever lived?

Certainly not Colin Smith. John Bonham. What artist/song/genre do you secretly enjoy listening to?

Russian Polka Greatest Hits!What movie role would you like to have played?

Road Runner. Who would you most like to meet/have met?

Genghis Khan. What artists would you most like to have played with in the band of your dreams? David Bowie on vocals, Prince on guitar and (Franz) Liszt (Hungarian composer/pianist). Though they could all play what they wanted, they’re masters!What’s the greatest place you’ve visited?

I’d have to say Venice. What’s mankind’s most irritating invention?

TV commercials. Who’s the funniest person who ever lived?

Bill Hicks. Actually, change that to Wilfrid Brambell, from ‘Steptoe and Son’.