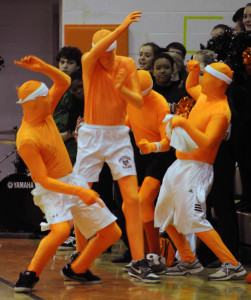 Orangemen arguing over who lost their hats.

A leading Ulster Unionist has claimed that the controversial marches and parades throughout the province every July aren’t down to political reasoning or religious pride, nor are they an excuse to brag about an ancient battle which their ancestors won over 300 years ago. It is, claims Augustus ‘Nutmeg’ Gillington, all down to bonfires and bowler hats. Speaking with The Heraldy Press, yesterday lunchtime, Gillington, a grand duchess with the higher order of the fourteenth chapter of Majestic Orangemen of the County Armagh branch, said: ‘Aye’.

When it was suggested that the bonfires the Orangemen build every marching season, some of which are over four feet high, posed a danger to some smaller woodland creatures, and the occasional insect, Gillington said; ‘Sure one time I seen a bonfire so ginormous, you couldn’t tell where the smoke stopped and the clouds started, sure there now, aye’. When it was pointed out to him that he had misused the word ‘seen’, and that the word ‘ginormous’ doesn’t actually exist, he ignored us, glanced at his bowler hat lovingly, and caressed his orange sash in a disturbingly affectionate manner.

The parades are also, according to Gillington, an excuse for the participants to display their new bowler hats, which they only get to wear 50 or 60 times a year. ‘Aye, we do have lovely wee hats, which, despite what some may say, don’t make us look like total w*nkers’, he claimed.

He went on to suggest that if people were so concerned about the dangers of bonfires, then they shouldn’t build houses so close to open spaces that may be one day used as bonfire sites, such as parking lots, fields, forests, rivers, parks, mountains, campsites or homes not inhabited by Orangemen.