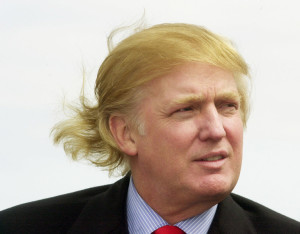 A representative for Donald Trump has refused to deny claims that the tycoon is considering the construction of a wall on the US’s east coast, to prevent Irish immigrants from entering the country illegally. The controversial presidential-hopeful has already angered millions of immigrants, particularly those who don’t own ladders, by claiming he will build a wall along the border between Mexico and the US, to stem immigration to the US, if elected President.

The Trump camp claims that such immigrants are keeping vital in-demand careers, such as desirable positions in the fields of potato-peeling, fruit-picking, pot-washing, tyre-pumping and advanced orthodontistry, from hard-working Americans, such as the wives and ex-girlfriends of his who weren’t from the Czech Republic. His idea for a wall along the Canadian border however, has arrived several years too late, as Canadians such as Ted Cruz and Celine Dion have already moved to the US.

A wall running from upstate New York, down to Florida’s panhandle, would, he suggested, prevent Irish immigrants from landing in the US, unless of course, they decided to fly into the country, rather than arrive by boat, which could initially cause problems. Trump-supporter Sarah Palin, has suggested building another wall, along the border of Ireland and North Dakota, to prevent leprechauns from stealing American jobs at Disneyland. Palin went on to use the Great Wall of China as an example. ‘Lookee what happened there, you don’t see folks from New Zealand or Westmeath pitchin’ their wagons and climbing over the Great Wall of Chicago’.

Should the eastern wall go ahead, there are 812 construction firms battling for the contract, one from Paraguay, the rest from County Offaly.