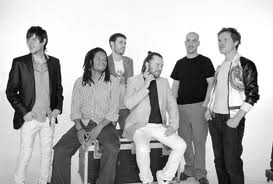 Even were Mick Pyro, Benjamin Loose, Brez, Deco, Orla La and the rest of the Republic of Loose dove-like birds that raced, carried and cooed their way through life, it’d still be nigh on impossible to pigeonhole them into any exact musical species.

They’re too cool for country, too funky for folk and just a tad too ghetto for goth.

Like a raggle-taggle gang of close-knit funksters, the nine-piece (Nontet?) Dublin group has blazed a musical trail in Ireland as wide as it is bizarre, unique as it is fresh, and devastatingly stylish at the same time, all the while firing musical gems towards a bewildered yet enamored audience, clearly wanting more, though of what exactly, they’re not completely sure.

It just feels good to dig it, as if the ’70s swung by the ’80s on their way to the 21st century, and had a blast in a nine-seater Scooby Doo-type van with the seats down, the volume up and the spectators knocked sideways.

This is Republic of Loose, just finished a two-week set of dates in New York City, the band, fresh from several doses of praise from fans such as Gary Lightbody of Snow Patrol, best-selling author Irvine Welsh (‘Trainspotting’), who once described the band’s single ‘Comeback Girl’ as “the greatest song ever written” on his online blog, and some chap called Bono, who has waxed quite lyrical indeed about the wonders of Loose.

A dose of hip-hop blended with old-school Rhythm and Blues, lightly brushed with a gentle helping of rock and a splattering of funk, and you’re some way to describing the music of Republic of Loose, though then again, one more step, and you’ve gone too far.

With three albums to their name (‘This is the Tomb of the Juice’, ‘Aaagh!’ and their most recent effort, ‘Vol IV: Johnny Pyro and the Dance of Evil’), celebrity fans (Sinead O’Connor, Shane MacGowan and Damien Dempsey have all joined them on stage at different gigs) and already their own tribute act (the delightfully-named Republic of Luas), Republic of Loose are dangerously close to something big, what it is exactly, we can’t tell.

Perhaps that’s why we sat down with the band’s lead vocalist, Mick Pyro, in the midst of the group’s triumphant return to New York City.

Mike Fitzpatrick (MF): It’s not the band’s first venture to New York, but looking at your schedule, it could be the busiest. How has the tour been going so far?
Mick Pyro (MP): Yeah, it’s going great. I mean, the first gig, we were very nervous, at (downtown Manhattan venue) Le Royale just around the corner from tonight’s show (at S.O.B.’s). It just took that one gig to kinda settle down and get into it, but the one at Joe’s Pub the other night was great. We seem to be getting a pretty good response so far.

MF: You supported Snow Patrol during one of your previous trips?
MP: That’s right, we played with Snow Patrol at The Bowery Ballroom, and then we did another gig with them in Boston. Though we’ve gigged (in the US) a good few times.

MF: How have the crowds been responding?
MP: Great, yeah! I mean, last night’s show in Queens wasn’t as great as it could have been but the previous show was amazing. The crowd were all going nuts, singing along with us.

MF: The audiences, have you found them to be different than Irish fans?
MP: Yeah, they seem a little more musically knowledgeable, and they tend to listen to the lyrics more. They’re definitely more of a listening audience, they’re quite polite, but also, pretty vociferous. So, a different audience yes. The Irish crowds just get locked and have a good time!

MF: What memories do you have, from previous trips to the city?
MP: Well, we love coming here. Every time we’ve come over, we’ve enjoyed it, you know? It tends to be a bit nuts, the last time was certainly a little crazy, but this time around we’re just taking things easy. We always have a great time though. We love the music (of New York), we’re hip-hop fans, and here’s where a lot of it comes from.

MF: Rapper Styles P is set to introduce the band tonight, he performed on your last album too, how did that come about?
MP: That’s right, basically, we’re all big fans of (Styles P’s group) D-Block, especially Styles P, and we’re all so into hip-hop, so, we found out that this girl who was going to work with us, Christine, she worked with Styles P’s management as it worked out, and (through her) we gave him a track. We thought he’d just be dismissive of it, or just do a token rap on it, but he did an amazing bit of rhyming on it, it was really moving.

MF: The Republic of Loose sound has proven to be difficult to categorize, how would you describe the band’s music?
MP: Well, it is very hard to describe I suppose. (Thinks) I suppose it’s R’n’B, but not in a contemporary R’n’B sense. Rhythm and blues, with a rock or soul dynamic, or maybe rock music with kind of a grimy soul element to it, that’s it! Kind of like Sly and the Family Stone with bits of The Rolling Stones added in.

MF: How does such a group fit in with the rest of the Irish music scene, an environment more used to producing singer/songwriters, rock acts and traditional groups?
MP: Well, we stick out, I suppose, like a sore thumb. There’s not that many bands, in Ireland, doing the kind of thing we’re doing. I think we’d stick out anywhere though really, I don’t think we’re like many other bands around, in terms of the different styles of music we tend to mix together. In Ireland especially though, but I think people like us there because we were maybe a breath of fresh air. But then again, we were controversial and because of that, people hate us in equal measures, or else they love us, it’s one or the other!

MF: According to Wikipedia, there’s a not so subtly-named tribute act out there called Republic of Luas, what do you make of that?
MP: We were so delighted when we heard that we had a tribute band, that we had to go see them right away! We’ve met them a few times, they do a lot of songs that we don’t do live. Songs that we could never play live, slower ones, because everyone falls asleep!

MF: You’ve been joined on stage before, by the likes of Shane MacGowan, Sinead O’Connor and Damien Dempsey, and been lauded by the likes of Bono, Snow Patrol and Irvine Welsh. That must feel pretty good?
MP: Yeah, it’s great to get praise from anybody. We’re honored any time someone praises us, particularly if they’re artists themselves. We’re lucky in the sense that we’ve gotten respect from people who have been successful themselves, and good at what they’re doing, so we respect that.

MF: What are the plans after the New York gigs, is there time for a break, or is it straight back to work?
MP: No, we’re going to do a few more gigs around Christmas, try to make a bit of money! We don’t know what’s happening in January yet. We’d love to come back here after Christmas. Though only if we can afford it!