Survey Finds Most Irish Americans Have Never Heard of Wexford. 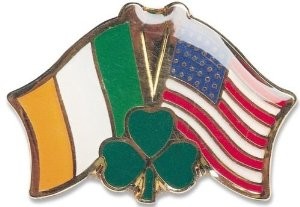 Two flags, with a leaf thing in the middle.

A survey has determined that many ‘Irish-Americans’ have never heard of Counties Leitrim, Wexford or Roscommon. The surprising development occurred just one month after the biggest day on the Irish-American calendar, ‘Saint Patty’s Day’, a week-long psychological odyssey, where those of Irish grand-parentage get to wear Irish ‘tricolor’ pins on their lapels, and be more Irish than the rest of us, while younger folk, who enjoy the music of Dropkick Murphys, The Dubliners and Philomena Begley for one day a year, get to be slaughtered drunk and hang out with married firefighters.

The study, carried out by numerous institutes of higher learning in both countries, as well as the college of agricultural hairdressing in Sligo, found that of all 43 counties, the most famous ones were perhaps not surprisingly; Dublin, Cork, Galway and Mullingar. Meanwhile, lesser-known counties included Roscommon, Wexford, Connecticut and Leitrim, the last of which was only recognized by nine people out of 1,000 participants, with one person assuming the word ‘Leitrim’, due to its provocative name, was something of a sexual nature.

Said one of the survey’s participants, Brad Williams from County Bronx; ‘Once they let us out of that van after so long, with no food or water for days, I’d have admitted to never having heard of California. It was a cunning ploy by the survey’s organizers, all of whom are from Wexford’s bitter rivals and close neighbors Donegal, to punish us into admitting to never having heard of their more illustrious and glamorous counterparts’.

Ireland, the spiritual home of most Irish-Americans, even the Presbyterian ones, was for many years divided into 32 ‘counties’, until the so-called economic boom of the ‘Celtic Tiger’ years, when eleven more counties were created, and sold to developers from Japan. It is however, no shock to folk from the lesser-known counties, to have received little in the way of recognition, says one proud ‘Wexican’, farmer Anthony McDermott (15) from Enniscorthy; ‘Sure, ’tis all a load of oul’ sh*te anyway’.

Words by Bosco Coppell. Pictures by ‘Medieval Trinkets by Dermot’.