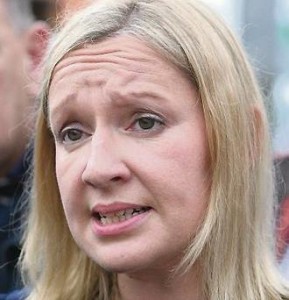 Conservatives on both sides of the Atlantic rejoiced over the weekend, after American right-wing icon Sarah Palin (pictured on left) attempted to contact her alleged Irish counterpart, Lucinda Creighton (right), in a bid to wish Miss Creighton luck in the Irish General Election.

The plan was in vain however, as Mrs. Palin, despite being a ‘really good counter’, miscalculated the time difference between Alaska and County Carlow. Instead, she wound up calling the US Space Station ‘Fortitute’, eleven miles above the Arizona desert. Here she was kept on hold for four hours, as the astronaut, a lifelong Democrat was ‘otherwise engaged’. It was an expensive error, which will cost the US tax-payer $441,009, as the US has no long-distance telephone agreement with outer space.

Miss Creighton, meanwhile, a much-loved occasional politician who departed the ruling Irish parliamentary party Fine Gael, allegedly due to that party’s refusal to make daily mass-going compulsory, has since established her own organization, called ‘Renua’, which roughly translates as ‘New Re’.

New members are encouraged, with recent inductees being awarded a $41 cash prize, a barely-used bicycle and the opportunity for one’s first eleven children to be baptized half-price at Saint Gordon’s Catholic Church in Enniscorthy, County Wexford.

Miss Creighton’s party is the 23rd such organization to have been formed in Ireland since last Thursday, and will, if it gathers the support it expects, last until at least until the end of the Easter holidays. Currently it is the 19th most popular party in Wexford, and also has two supporters in the Isle of Man.

The similarities between Palin and Creighton, are seemingly endless. Both enjoy traditional Christian behavior, though while the American enjoys murdering bears with automatic weapons fired from a hovering helicopter, the Irishwoman prefers mass. Both are females who hope one day to move into politics, the two are avid readers, with Palin favoring every newspaper in the entire world, while Creighton enjoys perusing the newsletter of whichever parish she happens to be campaigning against 21st century values in at the time.

Healthcare is of the utmost importance to the Irish party, with vaccinations promised to cure individuals from mumps, rickets, rubella and homosexuality. The American however, feels US President Barack Obama, has destroyed America, with his attempts at allowing poorer folk access to medical assistance, suggesting instead, that each household has a medium-sized box of band-aids (plasters), each of which must be washed before reusing. We tried to contact Mrs. Palin’s office, but her spirit was too busy soaring with delight as her patriotic heart beat with pride when she looked at her supporters praying, reflecting, misspelling stuff and drunkenly brawling, to deal with the likes of us.

Words by: Bosco Coppell, Pictures found in a canal by Rusty Henderson.