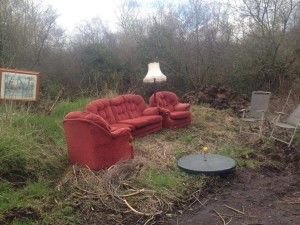 ‘Chillin’ In Me Outside Gaff’ (Artist unknown).

In what has been described as a surprising move in the arts world, New York City’s Museum of Modern Art could soon be including among its display, a work by an unknown, but highly-regarded artist from County Dublin. In recent days, a four-dimensional piece, provisionally titled, according to a representative for the mysterious sculptor; ‘Chillin’ In Me Outside Gaff’, has been whipping up an artistic storm in creative circles, both nationally, and globally.

An assistant curator at the prestigious New York artistic hub, Dr. Harvey Goldberg, claimed that such an example of simplistic originality was rare during this practically artless era, where a vacuum of such intensity may well be filled by creative wizards such as the Lucan-based phenomenon, who so far, is known only as ‘Anto’. The piece, comprising of a number of ‘living room’ type objects, such as a couch, easy chair, lamp and side-table, have been arranged at an outdoor spot in Lucan. The scene is popular with courting couples, lads who do dump stuff where they shouldn’t be dumping it, and blokes who do be legging it from the Gardai after doing something unsavory in the village, like breaking stuff, or not paying for their snackboxes and running off.

An appeal has been launched by the museum, to determine the artist’s identity, especially before them lads over at the Louvre (the Paris one, not the one in Wexford), get wind of the situation, as there have been several French accents heard recently on Tandy’s Lane, discussing the positioning of some discarded Monster Munch bags.