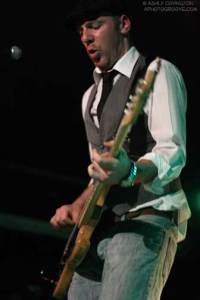 Following in the footsteps of Paul McCartney, Sting and, ahem, Kajagoogoo’s Nick Beggs, this week’s ‘At The Mike Stand’ subject is one of those rare species of artistes, the bass-playing lead vocalist.

Dublin-born and reared Neil Eurelle has been singing and playing with renowned four-piece rock act Stand, since the mid ’90s.

A major draw in their native Ireland, the band relocated to New York in the early 2000s, where they’ve proved to be a big hit on the college circuit, also playing scores of sold-out shows throughout the US.

With four studio albums already under their belts, the guys are currently preparing for the release of their fifth effort, with a major show scheduled for Tuesday, October 20th, at New York’s Bowery Ballroom venue.

What would you like your own tribute act to be called?
“SIT”. We’ve been pushed a million times to change our name. B******s to that.

When’s the last time you laughed out loud?
Yesterday. A friend played me a Kajagoogoo Record!! (Look them up. You’ll see what I mean)

What act would you like to have seen perform live?
Led Zeppelin

What team do you support?
Man U. Doesn’t everyone?

What period in history would you most like to have visited?
My surname is Eurelle. It’s French. Apparently the Eurelles arrived in Ireland when the Normans invaded in the 11th Century. I’d like to go back to just before they set sail and tell them to stay put! Did they not realize the weather in Ireland is what it is??!

What song would you most like to have written?
“Billie Jean” – everyone knows that tune from the first drum beat. Amazing!!

Who or what, would make you leave a room?
When politics and drink are mixed, it’s time to leave.

What cover version do you most enjoy performing?
‘Under Pressure’ – great musicianship and great vocals.

What movie role would you like to have played?
Col. Slade (Al Pacino) in ‘Scent of a Woman’ – WHOOOO AHHH!!!

Have you ever been told you looked like somebody?
No, but Chris Martin gets told all the time if he shaved his head he would look just like me!

Who’s your favorite Beatle?
Paul – What a bass player.

Who’s the most rock and roll person who ever lived?
Bill Graham – to a manager at the Fillmore door: “If you ain’t playin’, you are payin’.”

What artist/song/genre do you secretly enjoy listening to?
Still a big A-HA fan. Sad I know.

Who would you most like to meet/have met?
Ahmet Etegun (founder of Atlantic Records and former president of Rock and Roll Hall of Fame) in 1978. We’d be famous.

What book can you read again and again?
‘The Shadow of the Wind” – Carlos Ruiz Zafon.

What”s the greatest album ever recorded?
‘What’s Going On?’ – Marvin Gaye. He made a whole record with 4 chords and 1 groove!

What artists would you most like to have played with in the band of your dreams?
Lennon, McCartney, Harrison and Starr – It does not get any better!

What do few people know about you?
I was the guy singing on those Milli Vanilli records.

What sitcom character can you most identify with?
Felix from ‘The Odd Couple’.

What movie can you watch over and over again?
Any of the ‘Bourne’ movies. Very cool.

Who’s your favorite cartoon character?
Tom – I hate cats, but that guy got a raw deal.

What’s the greatest place you’ve visited?
NYC. Rocks like no other.

Who’s the funniest person who ever lived?
Billy Connolly – I can safely say he is the person I have laughed most at.

At The Mike Stand with Dominic Cromie.

At The Mike Stand with Hazel Larkin