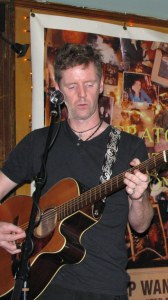 Singer/songwriter Michael Brunnock, probably The Mike Stand’s favorite County Meath native, recently released ‘Live in New York’, a stunning twelve-track collection which the talented troubadour recorded in his adopted city’s acclaimed ‘Living Room’ venue back in 2007. No really, he did. Check out his website, www.michaelbrunnock.com if you don’t believe me. Released by Araglin Records, ‘Live in New York’ was Brunnock’s second solo ‘long-player’, after 2007’s, ‘So I Do’. A well-known and respected figure on both New York and Ireland’s music scene, he’s recognized as both a solo artist, with his Ireland-based band Little Palace, and as one of the founding members (along with Brendan O’Shea, Mark Dignam and Jenna Nicholls) of New York-based musical outfit, Fairplay Collective, a unique group of artists that share their resources, ideas, gigs and costs, in an effort at assisting one another get noticed. Having just returned from a triumphant tour of Ireland with Little Palace, Michael, who can occasionally be found performing at downtown Manhattan venue The Scratcher for its series of Sunday afternoon sessions, was good enough to take a break between gigs and join us ‘At The Mike Stand’.

Who’d be in your supergroup?

When was the last time you laughed out loud?

On Thursday. Every Thursday I laugh out loud even If I think it’s not funny.

I like Gaelic games and rugby. Meath in football, other than that I’m

not a big sports fan. Being a sports fan occupies a lot of time and focus .

What period in history would you like to visit?

1604 in Ireland. Around the time before the flight of the Earls, or meeting Saint Patrick or the druids of Ireland.
What movie role would you like to have played?

Who, or what, would make you leave a room?

‘The Life of Brian’.

What cover version do you most enjoy playing?

I was once asked for my autograph on Wexford Street in Dublin, a day after playing Whelans.

When I handed it back, the girl glanced at me sideways at me with a glazed look and informed me that I wasn’t Glen Hansard. I knew that already. I went home and shaved, and wrote a couple of songs I thought the Frames should play.

Gorecki. I didn’t grow up with classical music, but I got hooked on Gorecki.
Have you ever walked out on a movie?

Yes, ‘Spiderman 3’. I went with my son but I soon realized that he was too young to watch it. I had to promise him a trip to McDonalds.

What actor should play you in a movie about your life?