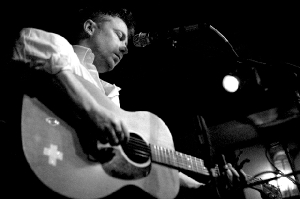 Having already recorded five full albums, Dublin-born singer/songwriter Mark Geary is no stranger to the streets of New York City (all available on iTunes or at www.markgeary.com). Mr. Geary’s name is often synonymous with that of the late Jeff Buckley, with whom he appeared on several occasions back in the 1990s in various Manhattan venues. Having made his own mark on the live circuit since, he’s developed a major following both in the US and in Europe, where he’s currently touring. Mark, welcome to At The Mike Stand.

What would a Mark Geary tribute act be called?

It was never meant to be!

I laugh all the time. It’s a prerequisite for a sad man, to laugh out loud!
What act would you like to have seen perform live?

Hmm, me being in the room watching it? There’s so many. For just sheer performance, and sheer unbelievable talent, off the top of my head, would be Otis Redding and Nina Simone.
What team do you support?
Manchester United.

I’m kind of a history guy. I’m reading ‘Rubicon’ by Tom Holland. It’s about the fall of the Roman Empire, and all the madness that went on there. It’s basically what we have now. It was the blueprint for all the skullduggery and dodgy deals, buying off, bribery and all that. I’d love to just throw on a toga for a week or two and go check it out!

A racist, a sexist and a man who’s formed his opinions without investigation. The ignorant man who has suddenly all the opinions in the world, but has tested them nowhere. He just has these assumptions, based on nothing, you know? I’d jump out the window, I wouldn’t just leave the room!
What decade rules?

There was a time when I’d have said the ‘60s, but that feels a little dated now. I suppose the present rules, whatever decade we’re in now, it rules.
What cover version do you most enjoy performing?

I do Dylan’s ‘Just Like Tom Thumb’s Blues’ quite a bit. There’s a line at the end, ‘I’m going back to New York City, I do believe I’ve had enough’, and in certain places, it’s kind of like my ‘F*** You’ to the room, when the gig has been really hard. It’s a cover version where you can just spit those lyrics out. I do Radiohead’s ‘No Surprises’, from ‘OK Computer’ too, those two have been constants for a couple of years.

I adore Pacino in ‘The Godfather’, there‘s certainly that one. I’d also love to have a go at something like, ‘Streetcar Named Desire’, just shouting and roaring!

I used to be obsessed with Larry Mullen Jr! I thought he was the coolest dude. He, unlike me, had never had to say anything, he just was cool, and I was desperate to try to emulate that, and I could never do that, because I always spoke. Larry probably spoke four sentences in thirty years with U2.

I come from a big family, so the music collection was pretty substantial. I had to get through the Dylans by way of Joni Mitchell and Dr. Hook and the Medicine Show and a lot of guilty pleasures, but the one that I actually went out and bought was probably something horrific like Cyndi Lauper!

I’m such a Beatles fan, that I defend Paul McCartney. He got such a bad rap for a lot of the things that Lennon got credit for. I mean, McCartney was the culture vulture, he was going to the operas and whatever with Jane Asher. Lennon was writing ‘I’m Only Sleeping’, he was an incredible writer, and he had this disdain for the Beatle myth, which is fantastic. There were some two-part harmonies, between Lennon and McCartney, when they sang together, it actually sounded like another voice, like another Beatle in there when you think about it. Then George Martin said that George Harrison was the most naturally gifted member, just the hooks and whatever. But then, I love Ringo too. So, I can’t answer that!

I was listening to it today, I was in a restaurant, and Cyndi Lauper came on, and, you know, I really had a moment. Prince wrote a lot of her songs, ‘Time After Time‘, ‘When You Were Mine‘ and so on. She did this record a while ago, all her hits, it was astonishing, I knew every one of those songs backwards!

I would love to have been able to have had a band like ‘The Band’. To have Levon Helm, I met Levon once, he lives upstate, but just to have that thing, to have him, Robbie Robertson, those people, who just were the hardest working, no bullshit people. They had their madness, but that talent, to just have that gesture, you know, a wink, to Robbie, and off he goes. That communication, that comes from playing together in the grand ballrooms, and the s**tholes again and again and again, you know, I’d love that.

I’m kind of a comedy geek. I adore Woody Allen, I adore that incredible Jewishness, and the whole New York thing. Charlie Chaplin had a huge affect on me growing up, he had such a sadness, and Billy Connolly had a great presence.

‘The English Patient’, by Michael Ondaatje.