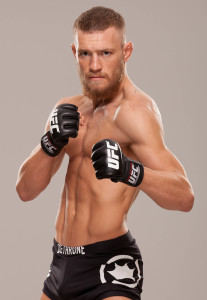 Almost 200 Irish towns and villages have attempted to claim to be UFC champion Conor McGregor’s birthplace. Of those, 192 have considered legal action, with two (Enniscorthy, County Wexford and Tullamore, we’re not sure what county that’s in, but we think it’s one of the ones in the middle) even going as far as the High Court, in an effort to convince several ‘really important judges’ of their supposed rights to the recently-crowned champion.

Mr. McGregor (26) defeated Chad Mendes last weekend in Las Vegas, Nevada, to clinch the interim Featherweight belt (current champion Jose Aldo pulled out of a fight with McGregor due to a rib injury), and in the chaotic days since, towns all over Ireland have been proudly claiming his citizenry.

Harry Dwyer, the curator at the ‘Conor McGregor Museum and Gift Shop’ in Bundoran, County Donegal, had this to say: ‘Sure we’ve been with Conor since the start, last Tuesday morn, I think it were. We’ve as much rights to him as anyone, and if you listen closely to the way he does say some things, you can almost hear a Donegal accent, so you can, to be sure there now aye. But that might have been some lad standing behind him when he was talking’.  Mr. Dwyer’s wife, Bernie, agreed, saying; ‘Aye’.

If somewhere outside Dublin is officially recognized as being Mr. McGregor’s birthplace, it will be the first town outside the capital to claim a world champion since 1927, when Herbie O’Rourke, two-time world juggling king, resided in Navan, County Meath, for several weeks, while his mansion in Clondalkin was being renovated.