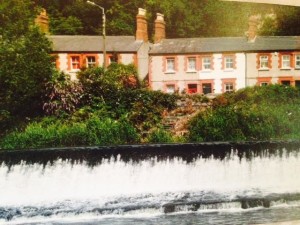 If this weir could talk, it would have a lovely Lucan accent.

A survey, which polled 27,000 households across Connaught, has determined the Lucan accent to be one of the ‘sexiest’ in Leinster. The poll was conducted by the European Union, to encourage a healthy relationship between the two sides of Ireland’s political divide in time for the July 12th Orange parades. Officials may have misunderstood Ireland’s political landscape though, thinking that the 800-year long conflict of interests boiled down to an East/West issue, rather than a North/South one.

The accent was one of 412 from Leinster nominated in the survey, and was expected to finish high on the chart, despite competition from: Dalkey, Howth, Clondalkin (east and south-central), parts of Sheriff Street and Louth.

Lucan was founded in the 17th century, by missionaries who had left Dublin’s inner city to preach Christianity to the pagans of County Meath. A brief stop for light refreshments in a field by the River Liffey, turned to a lengthy stay for some of the travelers, and before long, areas such as Edmundsbury, Dodsborough, Sarsfield and one of those new estates up by Neilstown, were developed and inhabited.

Lucan’s accent has progressed, especially since the legendary battles in the early 18th century with savage tribes from Kilcock, Leixlip and Maynooth, and in the late 1970s, following altercations in chippers after the pubs closed, when, according to local historians; ‘Fellahs did be lookin’ at other lads’ mots’.

The Lucan brogue back then could, in the words of Irish poet Jonathan Swift, ‘tempt the fairest birds from the tallest trees’, while nowadays, in the words of Deco McNamee, a ninth generation Lucanite, it would ‘tempt the fittest birds in The Foxhunter’s disco bar, before it were shut down like’.

Lucan was also under consideration in the 1970s, for the relocation and redevelopment of the Phoenix Park, to cater for the Pope’s visit, and a series of concerts by Barbra Streisand and Big Tom and the Mainliners. The town is currently the 4th fastest growing region in Ireland, after; Limerick City, the Liffey Valley Shopping Centre and Munster. Incidentally, Leinster’s sexiest accent was voted as being the north Kilkenny one, though only when spoken by a hot French bird.

Story by Bosco Coppell. Picture thanks to the private collection of The Rockefeller Foundation, Wisconsin.