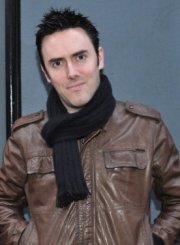 With four singles having reached the top twenty in the UK and Ireland, and an album that hit the top of the charts twice in Britain (showoffs) you’d think that Glen Power and his mates in The Script, Danny O’Donoghue and Mark Sheehan, would be a little too busy to be dealing with the likes of us at the Mike Stand. Not at all, sure between touring the United States with Adele as well as arranging their own first headlining string of dates for North America, being announced as the support act for U2’s third homecoming show at Croke Park on July 27th, Paul McCartney’s openers at Citifield next month (that’s July ’09 for those of you reading an old issue in the dentist‘s waiting room), a major feature article in rock bible Q Magazine devoted to the band and performing with Take That in Dublin later this month (June, no seriously), the trio have little to be doing to fill the time. We recently caught up with multi-instrumentalist Glen, one of the funkiest Dubliners around, and he was kind enough to put down the drumsticks, and join us ‘At The Mike Stand’.

By Mike Fitzpatrick.Who would be in the band of your dreams? I’d have Phil Collins on drums, The Edge on guitar, Freddie Mercury up front singing, and Sting on bass and backing vocals.When was the last time you laughed out loud? Two minutes ago with our tour manager. What act would you like to have seen perform live? Queen.What period in history would you like to have hung out in? The 50’s.Who/what would make you want to leave a room? Someone being rude, loud or insulting to people around them.What decade rules (and why)? This one, cos I’m in it!What cover version do you enjoy performing? ‘Heroes’ by David Bowie.What movie role would you like to have played? Sylvester Stallone’s role in ‘Rocky‘.What’s the first album you remember buying? ‘The Final Countdown’ by Europe.Who’s your favorite Beatle? John Lennon.Who’s the most rock and roll person who ever lived? Jim Morrison.What artist/song/genre do you secretly enjoy listening to? K.D. Lang.What’s your tipple (favorite drink)? Guinness.What book can you read again and again? The Bible.What’s the greatest album ever recorded? The Joshua Tree.

What sitcom character can you most identify with? Doug from ‘The King Of Queens‘.

What movie have you seen most times? ‘The Matrix’.

Who’s the funniest person who ever lived? Richard Pryor

← Interview with Ed Burns.
At The Mike Stand with Dominic Cromie. →