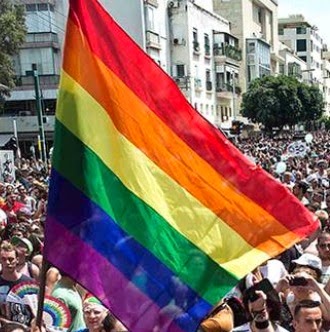 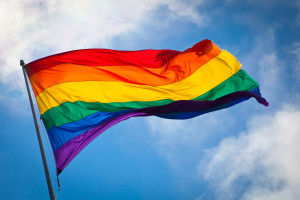 A flag, which is probably gay, yesterday.

Gays are to be allowed march under their own banner at New York City’s Saint Patrick’s Day Parade for the first time, following a landmark agreement between the parade’s organizers, officials from the city’s Gay Pride movement and the Woodlawn branch of The Pet Shop Boys fan club.

Before now, members of various Irish-themed gay and lesbian groups had to march underneath other organizations’ banners, which caused much embarrassment to all concerned, especially when they were requested to march alongside the Brooklyn Plumbers Union, or worse, mingled with the Roscommon Ladies Gaelic Footballers.

The agreement however, does come with a price, and that is, while gays will be allowed march, British people, or indeed, individuals who look, sound, smell or act British, will not. That means that Geordies, Scousers, Mancs, Cockneys, Mackems, Brummies and folk from the more glamorous regions of Doncaster, Rochdale and Scunthorpe, will be forced to either to hide their accent and pretend to be gay, or just wait for the St Finbarr’s Parade in 2031 instead. Finbarr, a semi-skilled carpenter from Mayo, is scheduled to become the patron saint of The Bronx, but as we were going to press, he was still alive.

The anti-British sentiment is thought to have originated several weeks ago when Irish members of the clergy in New York realized that an English lad invented Protestantism and Presbyterianism, while another discovered the Spice Girls.

The parade has been in existence since 1977, the time of disco, and the year that the first gay Irish man is reported to have arrived on Manhattan’s lower east side. That man, Bernie Hodges, has since left New York and relocated to the more gay-friendly east coast of Donegal, after a successful career as an accordionist with a Frankie Goes to Hollywood tribute band.

The Heraldy Press spoke with one of the parade’s chief organizers, south Wexford native, Hector Dominguez (19), who claimed that it was an important step in homoerotic relations between Irish men and women, and their gay counterparts. Said Hector; ‘To be sure, aye, ’tis a time of craic and sure if anyone knows anything about havin’ an oul’ bit of craic, sure it’s the gays. I don’t personally know any, and I’m definitely not a gay, I love women me, and I never had Ricky Martin stickers on my gym locker neither, so there’s no point even checking. No seriously, don’t check’.

Gays are now the fifth-fastest growing sub-section of New York life, just behind cupcake stores, Mexicans, those annoying people who jog on the spot at traffic intersections in Manhattan, and people who bum smokes off you even though they don’t smoke normally. Meanwhile, news of this historic event has reached all corners of the globe (even though the globe is round), with The Heraldy Press receiving congratulatory emails from gay organizations from Sligo, Wicklow, Leitrim (both east and southeast) and Kuala Lumpur. Even though we’re not gay ourselves. No seriously, we’re not, sure we used to watch Baywatch and everything.

Words by Bosco Coppell. Picture courtesy of Earrings and Trinkets by Deborah.