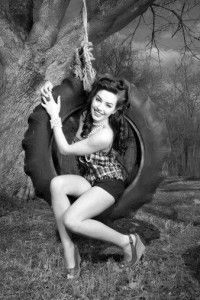 “One time my Da tied a rope around the branches of an oul’ tree behind our house, to make a swing. It was fairly dangerous and kids kept slipping off the rope and crashing through our greenhouse. I think 14 kids ended up in the Emergency Room because of that. So one day, my Da had a great idea, he tied a car tyre to it, so we could sit in it, and swing. That was brilliant, until our neighbor, Timmy Gillespie, noticed one of the tyres from his Toyota Carina was missing, and so was the rope that he had in the trunk of his car. So that was the end of that. Da also robbed Timmy’s ladder and his lawnmower, but they were unconnected to our swing adventures. We emigrated to the States shortly after that, settling in Miami. Now Da just robs beach umbrellas and swimming pool items from the neighbors. Loves robbin’ stuff, so he does”. – Caroline (33), formerly Roscommon, now Miami.