At The Mike Stand with Jo Kinsella. 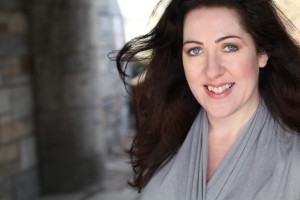 Kilkenny-born, New York-based Jo Kinsella is one of those busy types that makes us want to buy a faster pushbike. You see, there’s just no way that us folk here ‘At The Mike Stand’ are able to keep up with her schedule on our rusty old Raleigh Chopper. The award-winning actress, no stranger to New York’s, or indeed Ireland’s theater scene, was kind enough this week to slow down for a few minutes and answer some dreadfully nosy questions for us in between readings, auditions and performances. Jo is well-known and respected in dramatic circles due to her numerous lead and supporting roles in US-based and European productions of Laoisa Sexton’s ‘For Love’, John B. Keane’s plays; ‘The Year of the Hiker’, ‘Moll’ and ‘Big Maggie’, Brian Friel’s ‘Dancing at Lughnasa’ at The Irish Repertory Theatre, Jimmy Kerr’s ‘Ardnaglas on the Air’, ‘An Adult Evening with Shel Silverstein’, James Joyce’s ‘Eveline’ and of course her star turn in ‘House Strictly Private’ (also by Jimmy Kerr). An incredibly talented and popular figure on the New York stage, who is currently involved with the ‘A Memory’ series of short story sessions at the National Academy of Television and Science hosted by HBO, Jo has also contributed voiceovers to the upcoming Tara O’Grady album, ‘Irish Bayou’. Jo, welcome to ‘At The Mike Stand’.

I don’t desire to have written anyone’s song, I wouldn’t take that glory from anyone but I have to take my hat off to any band who can make a room go mental and that band for me is Chumbawama, for their release of ”Tubthumping”, AKA “I Get Knocked Down’ in August 1997. I spent that summer in Sydney getting down on my hunkers & jumping up again sweat pumping adamant to last the entire song…..Brilliant memories!

“Josie and the Pussycats”.

Sailing the Whitsundays (74 islands in the Great Barrier Reef) Australia

This morning with my husband.

Don’t know about a room but I’ve left a few subway cars with no air-conditioning during the New York summers, and we’ve all fallen victim to that empty subway car thinking we’ve scored a seat until that smell hits…

No, but I wish I walked out on ‘The Exorcist’ all those years ago when my friend and I agreed to go together. Later she admitted she had her eyes closed throughout the entire movie. I was disturbed for years later, especially driving home alone at night through Silversprings, the haunted stretch of the road to our house.

Scarlett O’Hara in ‘’Gone with the Wind”

I was told by an English guy I once snogged that I looked like ‘’Antonia de Sancha” I was so flattered and I couldn’t wait to see what she looked like. There was no Google back then , eventually I found her in “Hello” magazine and was so let down when her head appeared long and she kinda looked like a horse.

I used to make my own, taping songs from the radio with the tape recorder we got from the stamps we saved up at Texaco petrol station.

I used to think the Saw Doctors were uncool but now I love listening to them while driving alone with our baby. I get so nostalgic, goosebumps and a warm feeling in my heart. Only a voice from your own nation can take you home which I want to pass on to our little one.

I read scripts rather than books. These days I seem to be lucky enough being busy working on fresh new scripts sent to me reading them over again.

No offense he’s brilliant at what he does but irritates me, Jim Carrey.

Things Not To Say To Your Bartender on Saint Patrick’s Day (and the things he/she might say back).