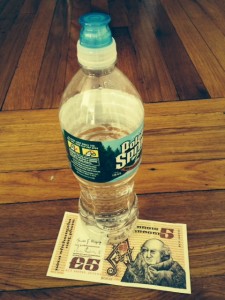 Anger has erupted throughout Ireland and indeed, parts of Westmeath, following the publication of a questionnaire regarding the unpopular water charges which have been implemented by the government. Of the 11,412 leaflets mailed to Irish households, just nine were returned filled-in, and of those, two were slightly destroyed due to fire damage (albeit different fires), one was partly covered with an unusual-smelling orange substance which burned at the touch and which may once have been food, while another had ‘Up Limerick’ daubed in chalk on the back.

The most controversial incident, which has had officer workers gossiping around their empty water-coolers however, was a remark made by one young man from the nation’s capital. Donal Harrigan, a 22-year-old dairy farmer from Dublin’s inner city, questioned why there were only two options underneath ‘Will You Pay the Water Charges’  on the pamphlet, those being, naturally, ‘Yes’ and ‘No’. Mr. Harrigan, a single man with several cousins, said other choices should be included. ‘Rather than just ‘yes’ or ‘no’ perhaps other options should be offered. Such as; ‘Perhaps’, ‘That may well be a possibility once my financial details get sorted out’, ‘Yes, when the country’s economy turns around’ and ‘I will in me hole’.

Mr. Harrigan went on to explain that he’d have substituted ‘hole’ for words such as; ‘boll*x’ or ‘swiss’ (a shortened version of ‘swiss roll’, which in Dublinese, is slang for ‘hole’, to assist those living in different parts of the country).

A representative for Irish Water was not available for comment, though when hounded for an answer, Irish Water executive Mr. Derek Flynn, of Enniscorthy, County Wexford, who wished to remain anonymous, said: ‘Ah lay off, will youse, I’m only doing me job’. He actually did say ‘youse’ as well, even though the incorrect usage of the plural of ‘you’ was pointed out to him.

Introduction of said charges have made the nation’s leader, Enda Kenny, a figure of dislike in many parishes, except his own in County Mayo, where they think he’s a great oul’ laugh altogether. Other political figures, such as Joan Burton (Kenny’s second-in-command, or ‘Tanaiste’) are also under fire with regards to the regulations, though individuals such as Eamon De Valera and that fella from West Clare with the mustache aren’t, as they both passed away some time ago.