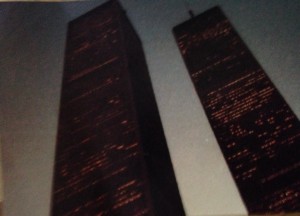 I’d a feeling he’d not be back. It wasn’t, like, female intuition, or anything weird, just, I don’t know, something. He kissed me as he was leaving, I was half asleep, and he didn’t normally do that, he was usually dashing out the door, dead late, not being able to find his keys, his wallet, his phone, his, I don’t know, something he needed. He was always losing things. Just the day before he lost his Giants hat, a raggedy woolen cap he’d bought for about four bucks years earlier. We turned the apartment inside out, but couldn’t find it. You’d think he’d lost his home, he was that upset.

That day, I don’t know, he’d had the time to kiss me on the cheek. He never had time in the morning. It was as if he was planning something, like he’d gotten up early especially. I could hear him clattering around the kitchen, tripping over his boots, he dropped a spoon on the tiled floor in the kitchen, and my God, it was so bloody loud. He’d obviously almost caught it as it hit the floor and bounced back up an inch or so, then missed, and lashed out to catch it, only to swat it against the wall, also tiled, incidentally, to make a teaspoon sound as if an out of tune brass band was playing in our kitchen.

He’d made coffee too, he never did that. Especially now, I suppose, with the baby on the way, and my coffee intake had been severely curtailed. He’d drink coffees at work, every so often he’d come home and I could still smell it off him, but he tried to deny it, being, as he was, in solidarity with me for the nine months, and avoiding all the bad stuff. Good stuff really, but, you know. Except beer of course, we’d made that agreement. He needed his beers every second Friday with the guys when he worked the day shift. After softball too, but that was a summer thing, he was considering playing soccer with some of the Irish guys at work, just so he could grab a few cold ones after, but he knew that’d be stretching it. He once went to kick a soccer ball back to kids playing on our street and mistimed his kick and ended up on his butt, but that was him, and why people loved him. I didn’t care, as long as he was here when the baby came, he could enjoy all the free time he wanted. That’s just it though, he wouldn’t be here when the baby came.

People say move on, but, they don’t know, they’ve not been where I am. Many have, thousands actually, have been very close to where I am, many from this very city, nearly 3,000 I think. Then, there’s a handful just like me, not many, expecting their first child with a partner who went out to work and never came home. The sad thing for me, besides the obvious of course, losing my life’s love, the man who, without wishing to move in on cliché territory, completed me, was the fact that I was oblivious to most of what was happening. It was 2001 remember, smartphones didn’t exist, even cellphones, they weren’t everywhere like they are now. If you went outside without your phone, like I almost always did, it wasn’t the end of the world. You didn’t have to check Facebook, read your emails, listen to Spotify or Pandora, check out the news. Everything could wait. I’d a TV, a radio, even a computer, nothing was that important that it couldn’t wait a few minutes. Unless it was a text from your husband to say he loved you and that he might not make it. Some things, I suppose, are that important.

I’d stopped going to the gym, obviously, in an advanced state of pregnancy, well, walking was about all I could manage. So that was it, a quick trip to the supermarket where I’d stroll around the aisles, looking for things I didn’t need, and ogling things I couldn’t have. It was just after 8am. Walking down the cereals aisle though, there appeared a change in the atmosphere. People began walking quicker. Whispers got louder, people were huddling. Some random guy ran in, past the checkouts, I thought it was a shoplifter, but why was he running into the store, not out? He was wearing running gear, I’ll never forget. An orange Nike top and blue and white tracksuit bottoms, he looked like he was a Mets fan with those colors, but he wore a Yankees cap. It’s funny, I remember that so well. Even now, I still think of that man, every time I see the Mets on television, even though he was probably a fan of the Yankees. He shouted something about a plane hitting the Twin Towers. Jesus, I thought, some poor flight-enthusiast, one of these amateur pilots, their poor family, but what were they doing flying over downtown Manhattan, it was so dangerous.

The assistant manager put on the little portable TV to see what was happening, what we saw wasn’t what we expected. Just as he flicked to NBC, the second plane hit. I was right. He wasn’t coming home. I’m glad he kissed me that day, I’m glad he dropped his spoon too and kept me awake, listening to his clumsy rush to get to work, his swearing because he couldn’t find his wallet, his keys, his phone.

I found his Giants hat. A few days later, during one of my cleaning frenzies, quite a few of which I’d had that September. In a few years, maybe our little boy won’t mind wearing such a raggedy old relic that his Dad, perhaps unintentionally left him. He’d have loved his Dad, maybe he’ll love the Giants too.